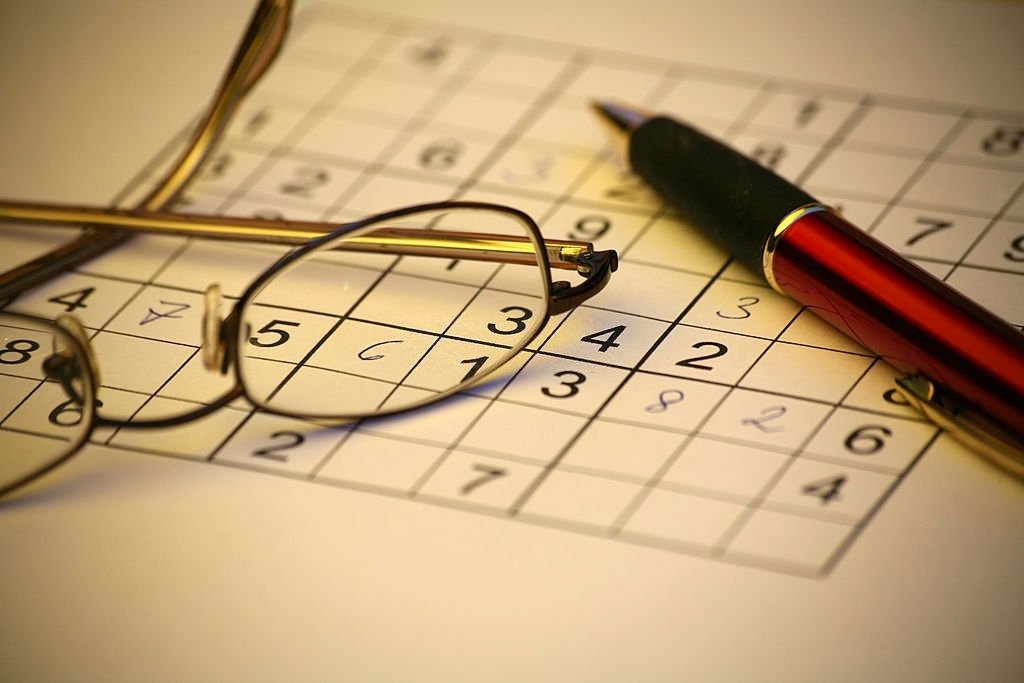 The XY-Chain approach enables you to remove candidates similar to Y-Wing.

An XY-Chain is a chain of cells that each contain just 2 candidates.

An XY-Chain employs just bivalve cells (similar to Remote Pairs), but the cells might contain arbitrary candidates. The only limitation (besides the obvious needs for the links) is that the XY-Chain begins and finishes with a strong connection on the same number.

As with X-Chains, this establishes that one of the endpoints must have that candidate put, and it may be excluded from all cells that view both ends of the chain.

Because the chain is exclusively composed of bivalue cells, the connection between the two candidates in each cell results in strong inference, allowing us to employ weak inference between the cells.

An XY-Wing with just three cells has the shortest XY-Chain.

An XY-Chain is a Double Implication Chain and an Alternating Inference Chain.

The following example displays an XY chain that results in elimination. 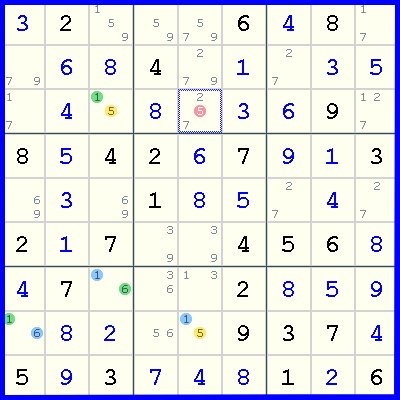 If we can establish a chain that is not a loop and that begins and ends on the same contender, then any Cell that “observes” (a Cell “observes” a different Cell if both Cells relate directly to the same region) both ends of the chain cannot have that candidate as its response.

Because the candidate at the end of a Strong Link has to be the answer for that cell, it cannot be the solution for any other cell that “sees” it. 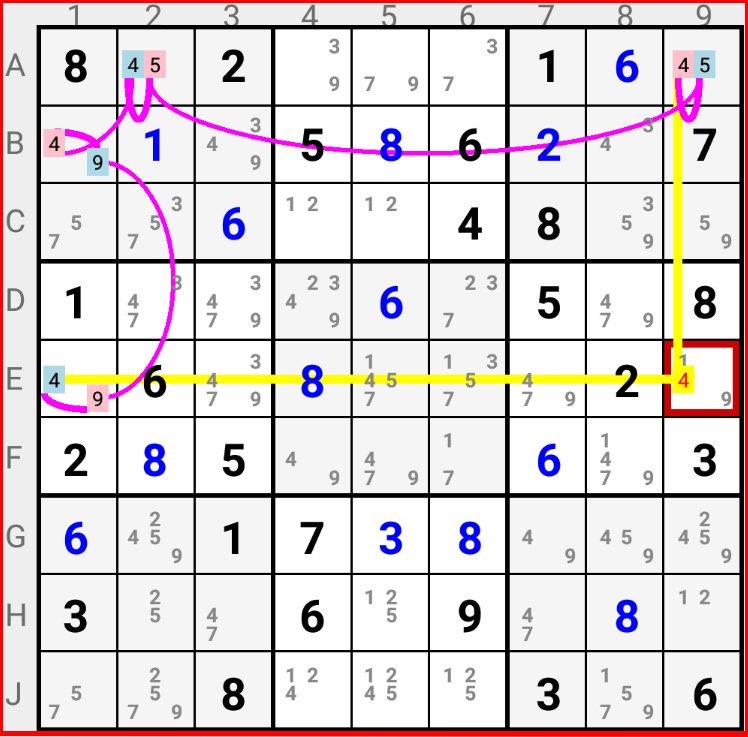 In the example, depending on which way the chain is read, candidate 4 is the termination point of a Strong Link in either E1 or A9. So the answer must be in one of these Cells. Candidate 4 in E9 may be removed since it sees both Cells.

How to Use an XY-Chain

Look for two bi-value cells (we’ll call them “pincers”) that can’t see each other but have at least one number in common (we’ll name it the “shared number”) to employ XY-Chain.

In the example below, our pincers are bright green, and they both have the same candidates.

If both pincers can view cells with the common number, you may be able to delete the shared number from those cells.

To accomplish so, though, you must first build a chain between the two pincers. 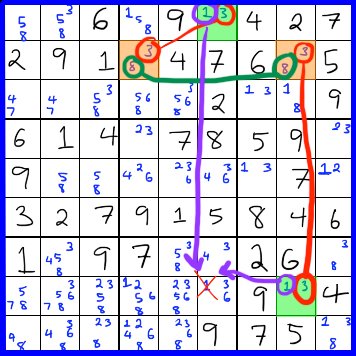 The light green squares represent the pincers in the preceding example. They are unable to see one other. However, they each have the number one and can see the number one in another cell (the purple arrows point to it.)

They can see cells with three, but we’ll attempt to create a chain that removes one.

To build a chain, begin with one of the pincers and employ the candidate you aren’t attempting to remove elsewhere.

For example, because we are attempting to remove a 1, we will begin the chain with the number 3.

An XY-connections chain must all be bi-value cells. Because our initial pincer can see a bi-value cell with a 3, we can attach the pincer to that cell.

Then we utilize the other number in that cell (in this example 8) to link to another bi-value cell that it can see. In this situation, we may link to another cell in the row that includes 3 and 8.

Finally, we may link to the other pincer at the grid’s bottom right corner. Since we linked, we may remove the 1 from the cell that the pincers can see.

As seen in the example below, XY-chains may be rather lengthy and convoluted, and they can exclude more than one candidate if the pincers can see more than one of them.

In either case, 1 is not in the overlapping region X.

This is referred to as an XY chain. 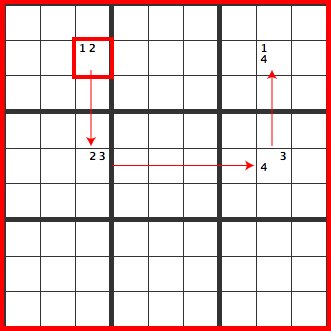 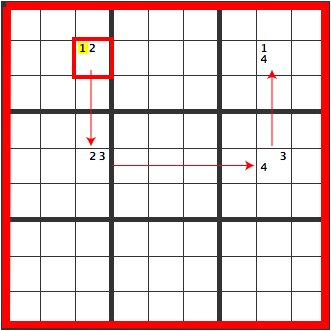 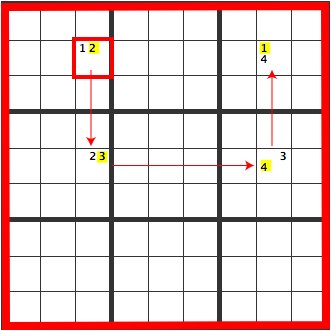 In the overlapping region X, 1 cannot be typed in any position of 1. 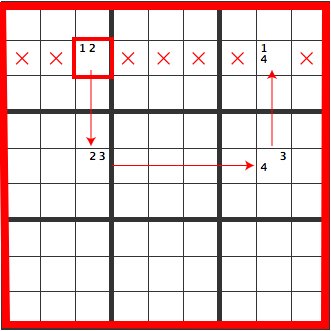 These are uncommon in real-world issues. However, it is an excellent approach to remember if you address a particularly complicated issue and get stuck. 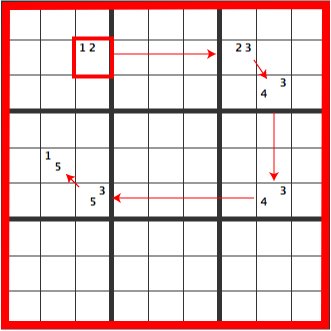 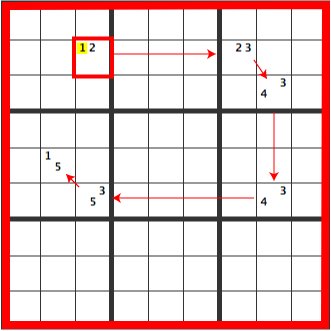 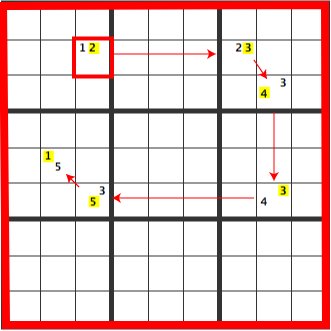 There can’t be any 1s in the overlapping region X in any position of 1. 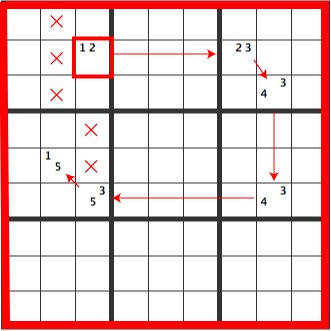 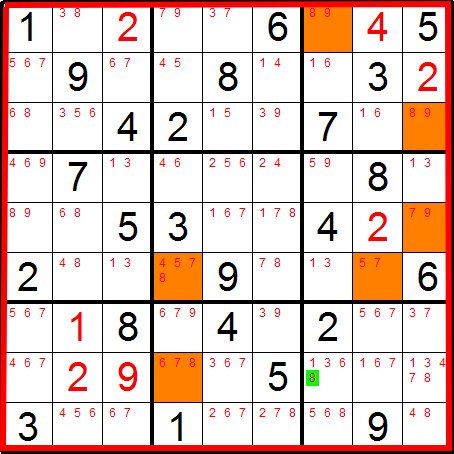 A Hidden XY-Chain is a set of cells that each include at least two candidates, one of which is tightly related to a candidate in the cell immediately before and behind it in the chain.

If the connected candidates in the first and final cells have the same number, then any candidate in the puzzle who has a unit in common with both of them may be removed.

Take a look at the sample on this page. The initial cell in the chain will be considered to be the one with an 8 and a 9.

Both the connecting possibilities in the first and final cells are 8s. Because the 8 indicated in green shares a unit with both of these 8, it may be removed.

Consider the reasoning below. If the first cell is an 8, the green 8 may be removed.

Hidden XY Chains may be exceedingly lengthy in puzzles with many cells and just two choices. Therefore, Sudoku Snake stops searching once a Hidden XY-Chain is more than 7 cells long to increase the program’s execution performance and because hidden XY-Chains may be swallowed in higher solution techniques.

Hidden XY-Chains has a skill rating of 1800, thanks to Sudoku Snake. 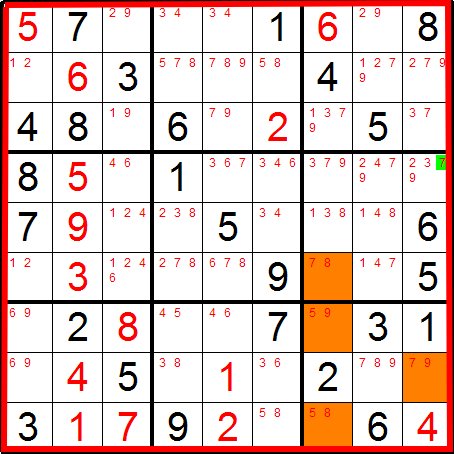 A Naked XY-Chain is a set of cells in a chain pattern containing just two candidates, with each cell sharing a unit with the cell behind it and ahead of it with a different candidate. If the candidates in the first and last cells are the same, every candidate in the puzzle who shares a unit with both of them may be removed.

Consider the reasoning below. The first cell must have a 7 or an 8 in it. If it is a seven, the green seven is deleted. If it is an 8, the second cell is a 5, the third cell is a 9, and the final cell is a 7, eliminating the 7 in green.

Naked XY Chains may get exceedingly lengthy in problems with many cells with just two choices. This is because Sudoku Snake stops searching once a Naked XY-Chain is more than 7 cells long to increase the program’s execution performance and because naked XY-Chains may be swallowed in higher solution techniques.

Naked XY-Chains have a skill value of 900 thanks to Sudoku Snake. 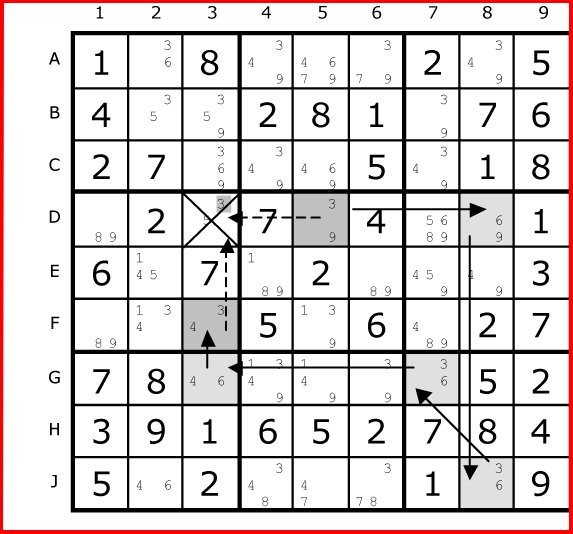 XY-Wing chains are a subset of a wider family of bi-value cell chains that look like a platted thread. From one end to the other, numbers are intertwined. If both ends have a candidate in common, we may demonstrate that one end or the other must-have that number, and any cells seen in common cannot. So we don’t have to limit ourselves to matching pairings.

Examine a chain as if it were a line of numbers:

All of these cells will always have one of two probable outcomes:

If any number in a cell with two possibilities is true, a cascade effect occurs, compelling all linkages to assume particular values. For example, the above chain may be seen on the Sudoku board below. The ‘pincer’ ends of the chain are dark in color.