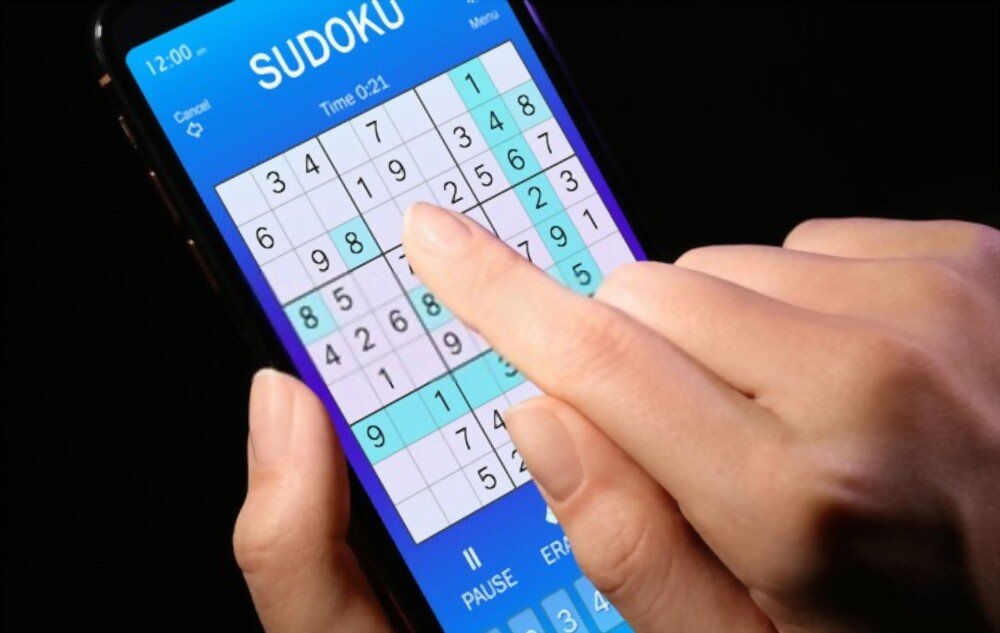 A Fishy Cycle (X-Cycle) is a continuous loop of single-digit candidates. It alternates between strong and weak linkages.

Before these patterns were recognized as constraint sets, the Fishy Cycle was proposed to generalize fish patterns such as X-Wing, Swordfish, and Jellyfish. 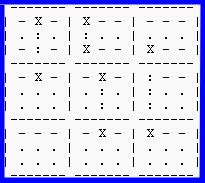 At the time, players felt that each defining line should have no more than two choices. This archaic definition of Swordfish and Jellyfish may still be found on certain websites.

X-Cycles are the beginning of a broad family of ‘chaining methods’ essential to solving the more difficult Sudoku problems.

Simple coloring is a method that is quite similar to X-Cycles.

We start with a single candidate and seek conjugate pairings, after which we alternate the colors for each candidate.

On the other hand, the X-Cycles technique can only be employed when the chain forms a loop.

When Should You Use X-Cycles?

Whether you notice that the numbers are linked in a loop during coloring, you may apply the X-Cycle technique to determine if any candidates can be removed.

There are an even number of candidates in the loop.

If the loop contains an even number of possibilities, we know that it is free of faults and inconsistencies.

Either one of the colors is correct.

As a result, we can rule out candidates who can view two or more candidates in the loop.

If the loop contains an odd number of candidates, we must use the concept of weak and strong linkages.

I’ll describe what weak connections and strong linkages are in more detail below.

When there is a conjugate pair, the relationship between the two numbers in the pair might be either weak or strong. Each one is explained in detail below.

When two of the same candidates appear in the same unit, they are referred to as conjugate pairs.

If that candidate appears more than twice in that unit, the conjugate pair’s link is considered a weak link.

If a conjugate pair has a weak link, you may claim that if one is true, the other is NOT true.

In the preceding example, I illustrate a connection between two 8s in a box because there is another 8 inside the box with the connected 8s, these 8s share a WEAK connection.

If the candidate of a conjugate pair does not exist anywhere else in the unit except in the pair itself, the pair’s connection is regarded as strong.

When a conjugate pair has a strong relationship, you may state that if one is NOT true, the other is true.

Because there are no extra 8s in the same unit, the 8s in the preceding example share a STRONG connection.

The Loop Has an Unusual Number of Candidates – Two Strong Links

If there are an odd number of candidates in the loop, we seek one with two strong linkages connecting it. If such a candidate exists, we know it must be accurate, and we can solve the square.

Why does this work?

If two candidates with opposing colors (let’s call them A and B) have a strong relationship with a candidate (let’s call him C), you may claim that if A or B is NOT true, then C MUST be true.

But you know that since they are opposing colors, only one of A or B can be true. So one of these will undoubtedly be false.

As a result, C is unquestionably true.

The Loop Has an Unusual Number of Candidates – Two Weak Links

If there are an odd number of candidates in the loop, we seek one with two weak connections connecting it. If such a candidate exists, we know it must be erroneous, and we may remove it. 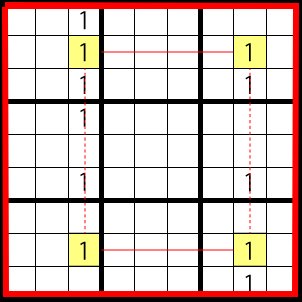 This acts in the same manner as an X-wing and always equals: 1 1 or 1 1. As a result, one cannot be typed in the X-marked places. 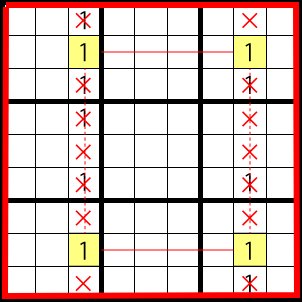 (It also works if there are strong linkages rather than weak ones inside the pattern.)

The number of candidates in the weak linkages may be reduced; however, these cells alter depending on the scenario. 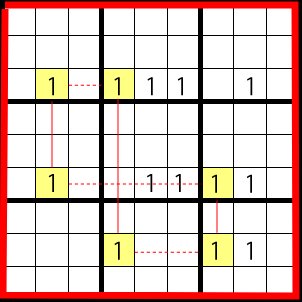 The 1 should go in one of the two patterns below. 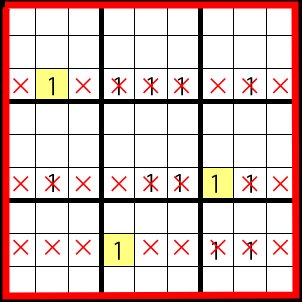 As a result, 1 cannot be typed in the overlapping regions X, as seen below. 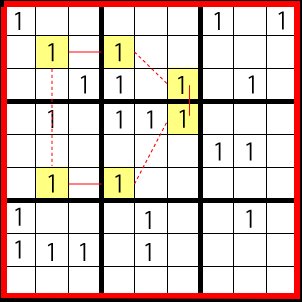 The 1 may be found in one of the two patterns below. 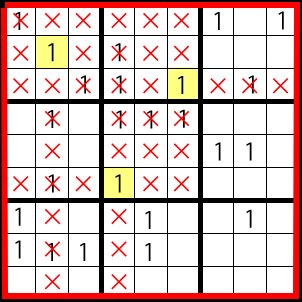 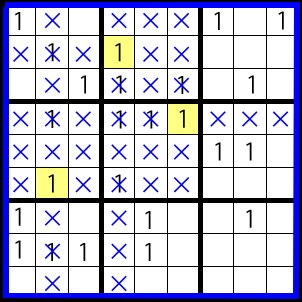 When the two patterns are joined, the figure below shows the result. 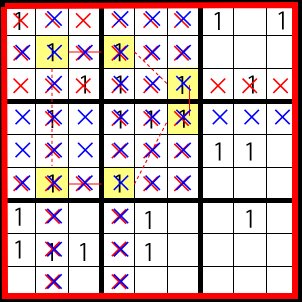 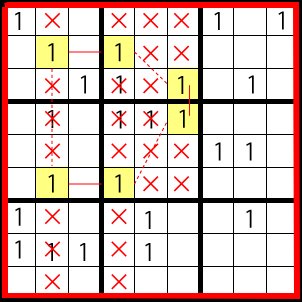 A 1 cannot be typed in the overlapping spaces highlighted with an X. (The Xs of the strong connection are not visible.) 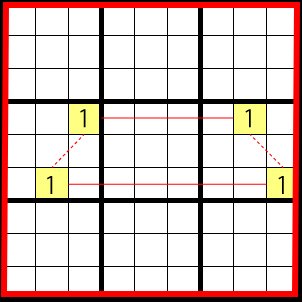 As you can see, 1 cannot be in the X-marked places.

When the samples are examined, the connection in the weak link, whether a row or column, is eliminated as a candidate, and the cells in that row/column are removed as candidates. If it is a box, the remaining cells are deleted as candidates. 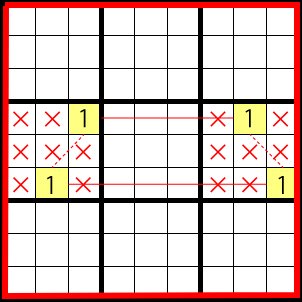 If you can utilize this approach, you are an expert at Sudoku. 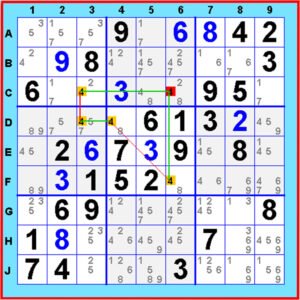 Odd-length X-Cycles are also beneficial, but the reasoning is different.

For example, consider an odd-length X-cycle that alternates except for one choice point with two weak links in a row.

The strong relationship indicates that one of these options must be chosen.

What if 4@D6 is selected? The chain demonstrates that 4@C6 is likewise deleted in that scenario. 4@C6 is removed regardless of whether 4@D4 and 4@F6 are picked; hence this “weak” X-Cycle unconditionally removes 4@C6. Weak X-cycles are more prevalent than ordinary X-cycles, making this a particularly valuable method. 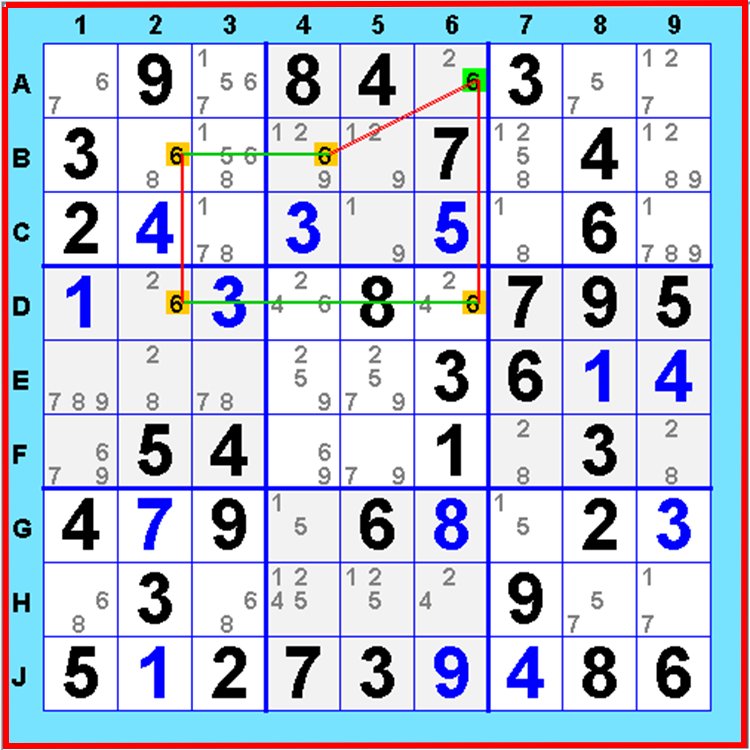 What about an odd-length X-cycle that alternates except for one choice point with two strong connections in a row?

The distinguishing decision point is forced rather than discarded in this example.

Let’s see how this pans out.

It can save time and effort by recognizing that strong x-cycles are just a subset of weak x-cycles.

In the above example, if we considered the 6@A6=6@B4 connection as a weak rather than a strong link, we would have a weak x-cycle, eliminating B4.

However, because 6@A6=6@B4 is a strong connection, A6 would be forced right away. So we don’t need to search separately for strong x-cycles – as long as we identify the weak x-cycles, the forced-choice will be obvious quickly after.

Rule 3 of the X-Cycle (Odd number of links) 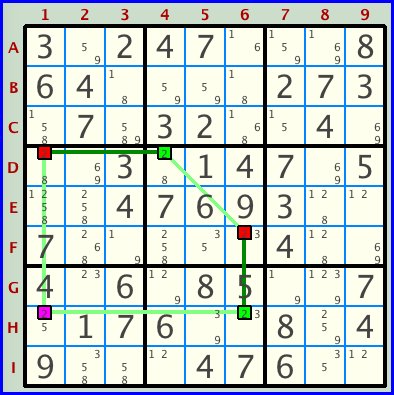 X-Cycles are similar to Single Chains in that they employ linkages between candidates with comparable numbers inside a unit (row, column, or box).

An X-Cycle is formed when a set of similar linkages join together to create a full loop.

If an X-Cycle fits the following characteristics, it is subject to Rule 3:

It has an odd number of connections.

There is just one example of a series of weak connections, while all strong linkages occur in groups with an odd number of members.

This problem features a loop for candidates with the value 2.

Examining the loop will quickly persuade you of the reality of Rule 3, which stipulates that the candidate at the intersection of two weak links must be a non-solution and may be discarded.