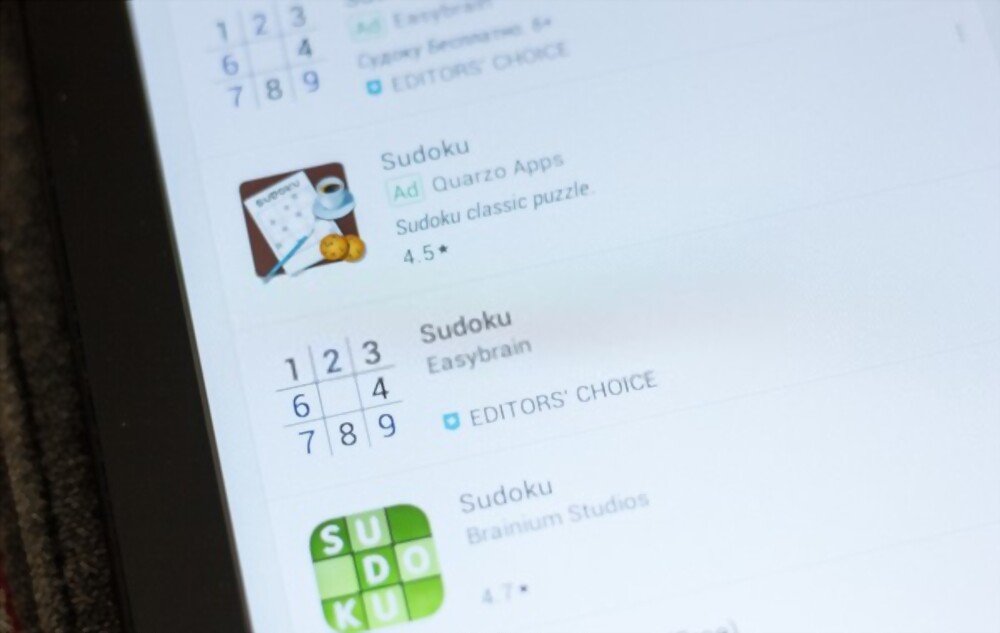 In this article, we’ll share with you the 10 best iPad apps of 2022 to help you master Sudoku puzzles!

An iPad is an ideal portable device for entertainment, and one of the most popular activities in recent years has been playing Sudoku puzzles.

A new iPad app will be released every day in 2022, and most of them will be games.

Here are The 10 Best Sudoku Apps for iPad in 2022 that can help you work on your Sudoku skills while you’re on the go, or just looking to relax and unwind after a long day of work at the office or school.

You’ll find apps with great graphics and games with compelling stories as well as the classics that never go out of style!

If, You are Looking to pick up a fun and challenging new hobby?

If you’re not into yoga or coloring, or you just need something to get your mind off of all those emails piling up in your inbox, you might want to try out Sudoku.

Sudoku is essentially a puzzle that involves filling in numbers between 1 and 9 in each row, each column, and each box on the board so that they don’t repeat themselves vertically, horizontally, or diagonally.

New iPad apps for Sudoku- Here are the best 10

The first and Foremost most Beautiful Sudoku App for IPad is Sudoku Joy Number-Game.

It has a 4.6 Star rating and it is 4 Years old Puzzle Solving Game.

It was developed by Finger Interactive Information Technology Company.

Sudoku may be a bit old school but it’s a great game that gets your brain working.

There is only one puzzle on Sudoku Joy, unlike some other Sudoku Apps for iPad where you can have multiple puzzles.

However, since Sudoku is so addictive and time-consuming, there’s no need for more than one puzzle in any of these Apps for iPad as long as you have enough to keep you occupied for hours.

There are also levels in Sudoku Joy that make it easy to play in just 10 minutes or over a week if you want an epic challenge.

With its clean design and smooth gameplay, Sudoku Joy is one of our top choices as a Top iPad App 2017.

Next, we will Discuss Killer Sudoku –Brain Game. Which is also an App for Ipad with a 4.7 Star rating and was Developed by the easy brain.

As, Sudoku has remained a highly popular puzzle game for iPad users, and has transitioned from a hand-held device to one that you can play on your iPad.

Sudoku puzzles come in various shapes and sizes, and the Killer Sudoku-Brain game for iPad provides you with more than 60 puzzles for 60 days trial after that they charge for playing $4.99 per year.

The app allows you to choose between three difficulty levels (easy, medium, or hard) depending on how challenging you want your puzzle to be.

Next, we will Discuss Sudoku Epic App for Ipad.

Sudoku is a great app for iPad users with 4.

It has four difficulty levels that appeal to all ages, plus hints and a tracking system so you can see how many puzzles you’ve solved in each level.

Sudoku Epic also allows players to save puzzles they like to make them easier later on.

Overall, it’s a great resource for Sudoku lovers who have iPads, with enough in its collection of puzzles to keep even longtime devotees occupied for months.

This one is highly recommended!

The next Excellent Sudoku App for IPad is Logic Wiz Sudoku App with 4.5 Star Reviews.

This is a great app for those that enjoy a more puzzle-like approach to Sudoku update on April 11, 2022.

Logic Wiz Sudoku gives you 25 different settings where you have to figure out which numbers are missing from each row, column, and region.

The levels start fairly easy with hints available if you get stuck but as it gets further along, there will be no hints or solutions.

This is a perfect game for someone who just wants to work on their Sudoku skills while they travel or just want to add some fun to their daily routine.

It’s an enjoyable experience that doesn’t take up too much time and is perfect for your iPad screen. It contains Ads.

Sudoku World for iPad by Brainstorming is one of our favorite free Sudoku apps on iPad because it features a wide range of difficulty levels, from easy to hard, and offers a variety of grid sizes.

For those new to Sudoku, there’s an interactive tutorial that teaches you how to play correctly.

It is a 4.7 Star Review App Developed by Choahsien Lee.

Once you’re ready for more challenges, there are six free puzzles available each day.

There’s also an in-app purchase available if you want access to unlimited puzzles at $4.99 per month or $35 for one year.

Either way, Sudoku World is sure to keep any sudoku player entertained for hours on end with its wide range of options.

Sudoku Quest-Color Sudoku is a new iPad app that brings Sudoku to life with bright colors and modern graphics.

It has a 4.7 Star Rating and is Developed by Hashcube Software private Limited, Available for Both Ios Devices like Ipad and iPhones.

The puzzles in Sudoku Quest use logic instead of numbers, making it ideal for anyone who has a hard time reading numbers or is uncomfortable with math.

A helpful hint system also allows you to enjoy puzzle challenges at your own pace without getting stuck too long on a single level.

This unique twist on an old favorite makes Sudoku Quest Color one of the best iPad Sudoku apps for any age group. 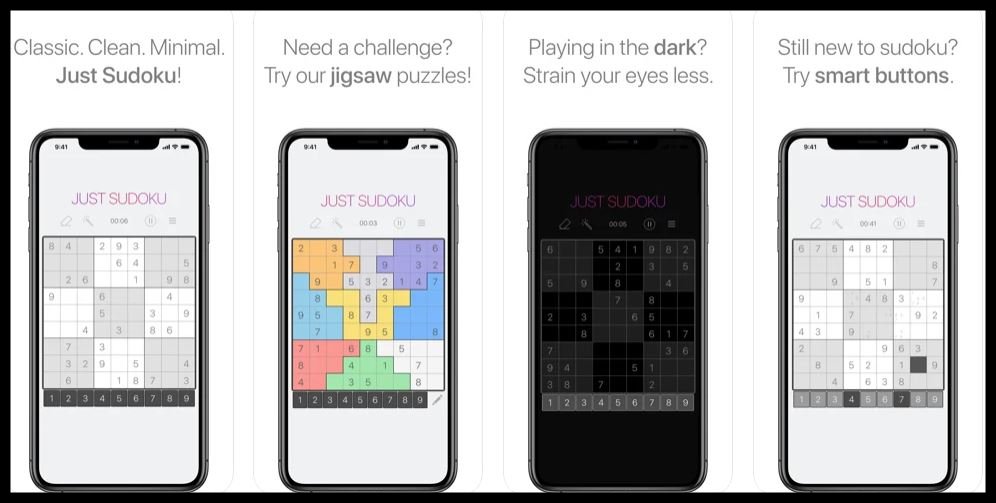 There are a lot of different Sudoku apps for iPad and iPhone available in the App Store and most of them offer free versions, but only a few provide you with no ads, good design, and a clear interface.

Next, we will See the Just Sudoku-Free play App for Ios Devices.

it has a 4.7 Star rating and 1.7k App reviews, it was developed by Keitgen GmbH.

Just Sudoku is one of those great solutions and it is developed by Nief Studio company.

The app provides everything that one might need from a great game for a mobile device and it is free for download.

So if you have an iPad or iPhone do not miss your chance to try Just Sudoku! 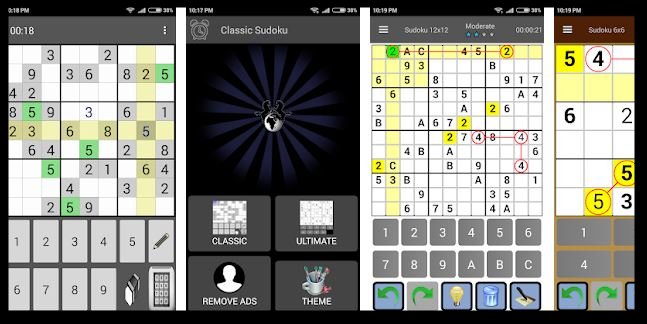 Sudoku Fundamental is one of the top Sudoku Apps in the iPad app store.

It is so simple yet so addictive game that will never bore you even after playing a hundred games continuously.

Sudoku Fundamental App design, UI, and ease of use have attracted all types of users to try out, install and rate it at 5 stars.

Although some complain about ads but overall mostly positive feedback for a future update for advertisement-free version and variety in each package as well as different types of board sizes etc.

But Sudoku fundamental is one game that helps you to keep your mind sharp with strategy planning skills and increase your focus ability during gameplay.

Simply Sudoku is a premium Sudoku app after a Trail Version for iPad with a 4.4 Star rating.

One of its most popular features is that it’s universal and it works seamlessly on any iOS device.

It also allows you to create puzzles and download community-created ones.

This free Sudoku app has an intuitive interface, so you won’t have trouble figuring out how to play a game of Sudoku on your iPad, even if you haven’t tried it before.

Whether you’re an experienced player or just looking for some fun with numbers, Simply Sudoku will make sure you enjoy your time playing with logic in no time at all!

Highly recommended as one of the top 10 iPad Sudoku Apps in 2022 by experts! 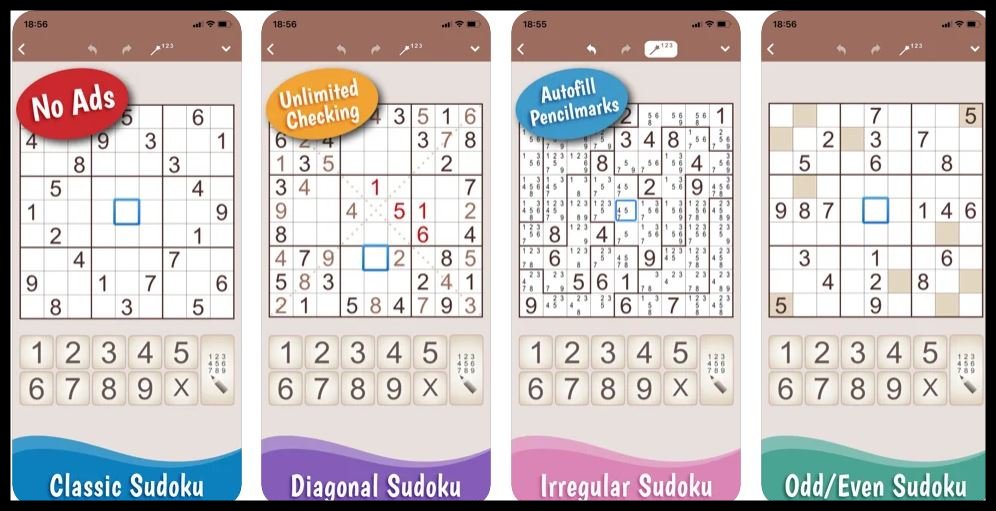 It has a Free Version for Both IOs and Androids.

The developers release new puzzles regularly, all of which are free to play.

This app will help you improve your cognitive skills while you are killing time on your phone. There are various difficulty levels, and users can save where they left off on the puzzles and return to them when they have a few minutes to spare.

There are over 120 free puzzles to choose from.

There are many great Sudoku apps available for iPad.

If you are looking for more informative blogs on Sudoku, be sure to follow us.

If you are looking for a great Sudoku app, any of these 10 apps will do the trick.