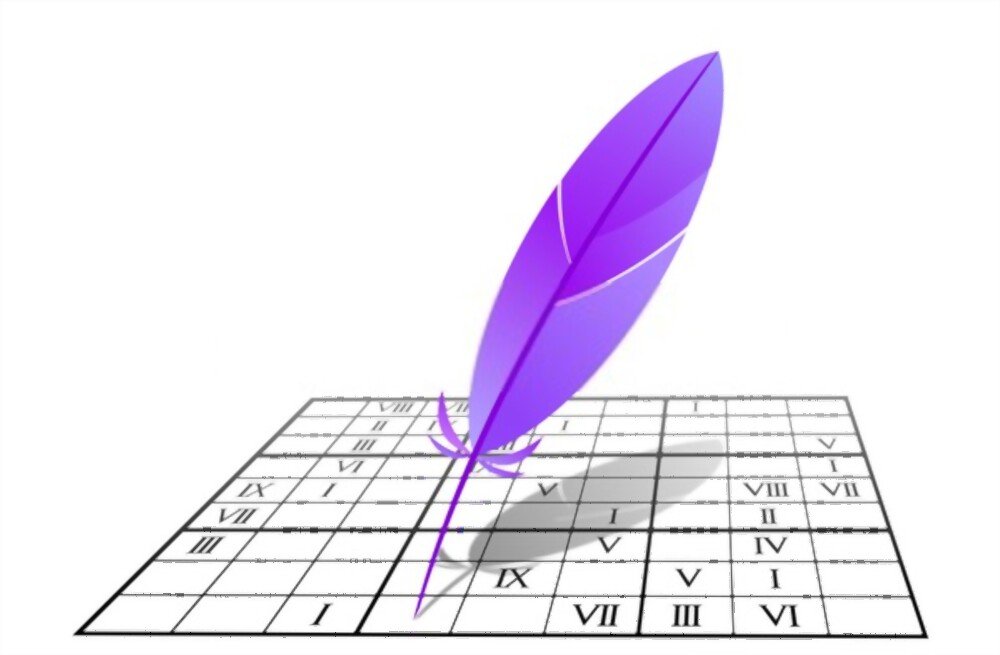 Sudoku has become one of the most popular games in the world.

People play it on the internet, in newspapers, and even on airplanes when they’re bored.

If someone has some free time, they will most likely be playing Sudoku.

This math-based problem has enthralled the entire world, and most people are delighted.

If you’ve ever played, you’ve almost certainly reached the dreadful point where you can’t figure out is how to solve puzzles.

You could wipe everything and begin over, or you could give up.

You’ve started wondering if there are methods you can apply to better your Sudoku game, regardless of what level you’re at.

If you have to start over, use a new strategy you haven’t tried before.

It could provide you with the unique outlook you require to complete the puzzle successfully.

While every problem has a solution, not everyone can solve it.

Sudoku is a strategy game that necessitates the development of skills.

If you have to restart, don’t be too frustrated. It’s all a natural part of the procedure.

The characterized by the fact that this resembles an X-Wing, but with three rather than four sides.

The player can be eliminated from the fourth corner, but it also leads to a lot more because we’ll do it in a minute.

You can use Y-wing tactics to help boost your odds of tackling the Sudoku problem, just like there are strategies for solitaire or mahjong.

To discover the methods and how they work, all it needs is some experience and research.

If you want to step up your game and give yourself a few well pats on the back, you’re in excellent hands here!

How to spot the Y-wing technique in classic sudokus? 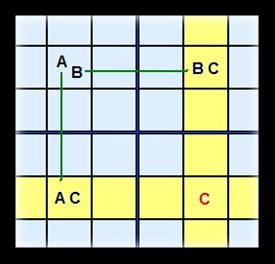 A, B, and C are 3 independent candidate integers in a rectangular configuration.

There are two possibilities in each of the three corners: AC, AB, and BC.

The key is in the AB cell.

If the answer to that cell is A, then C will undoubtedly appear in the bottom left-hand corner.

If AB is revealed to be B, C will make it into the top right-hand corner.

A complimentary pair is C.

Anything happens, C is assumed to be in one of the two C cells.

Both Cs can see the red C since the unit converges BC and AC.

There is no way a C can exist there, and this can be eliminated.

This illustration of a puzzle shows the area of influence that two example cells, designated red and blue, have.

In this situation, two overlapping cells are ‘seen’ by both. 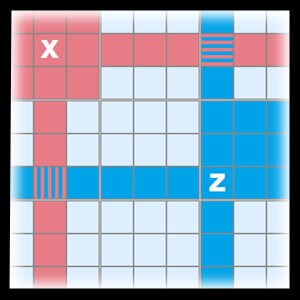 Our A, B, and C can see a lot more cells if they are more tightly aligned than merely the corners of both the rectangle they form.

Since they share the very same box in Figure 3, BC can see AB.

Because they are on the same row, AC can see AB.

All cells are designated with a red C which this Y-Wing can delete whenever number C is visible to BC and AC.

Another excellent ‘difficult’ Sudoku puzzle, this time with a chain of five Y-Wings, demonstrates the entire extent of this method.

The first three are shown below, but the remaining examples can be found by loading the riddle into the solver. 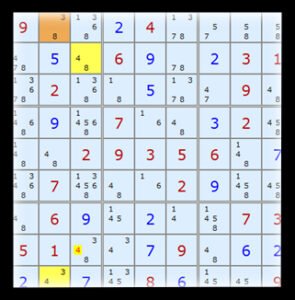 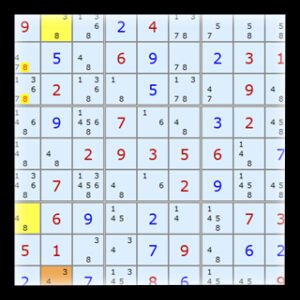 The initial Y-Wing locates an AB cell and A2 that connects 8 to the B3 pair and 3 at J2.

4 is shared with both pincer cells and must be placed whether in B3 or J2 so that 4 in H3 could be deleted.

Because of the placement in column 1, the next Y-Wing gets two candidates.

The next stage will be included since it demonstrates a nice rectangular alignment resembling the theoretical figure.

You really cannot ask for a more illustrative example. 4 will go at B1 and D6; otherwise, 7 and 8 will be used up, and B6 will be empty.

Candidate 4 in D1 is the only one that can see the yellow particles and, therefore, should be eliminated. 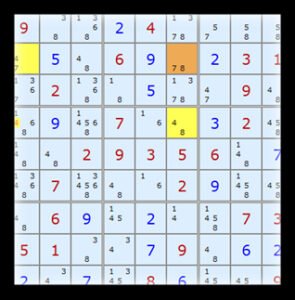 When Should You Use Y-Wing?

Starting with a square with exactly two candidates, Y-Wing moves on to the next step.

This square is also known as a pivot or a hinge. The pivot is indeed the red square as shown in the figure below.

If any one of the two possibilities in the pivot makes a conjugate pair in 2 distinct units, you can apply Y-Wing.

Pincers are a term used to describe the two coordinates of conjugate pairs. The pincers seem to be the green squares inside the figure below.

However, Y-Wing can only be used if both pincers have precisely two numbers and one of the 2 numbers is the same across both pincers.

You may be able to get rid of this common number.

The Three inside the green squares are the identical number in the previous scenario. Because they each include a digit from the red square, the pincers reconnect the red square.

Seek for squares that both pincers can see.

You can eliminate the shared candidate from either of these squares if it appears in any of them.

Because both pincers in the preceding image can perceive the yellow 3, the yellow 3 can be eliminated.

An illustration of a puzzle

The Y-Wing Technique can be used to remove a 6 in the preceding interactive puzzle. Are you able to locate it?

The string of puzzles: 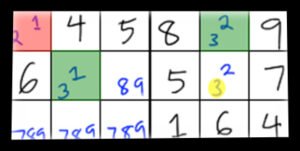 Continue to experiment with the tactics you’ve learned so far to see what works best for you.

Even the most skilled Sudoku solvers do not employ every strategy available.

Although there is only one answer to the problem, however, you do, that is all up to you.

It’s important to remember that this is designed to be a pleasant brain-teasing activity. Once you’ve mastered the fundamentals, you’ll be ready to take on higher difficulty levels and have a great time playing.

When I’m trapped on a Sudoku puzzle, what should I do? Tips

Here are a few more helpful tips for our readers.