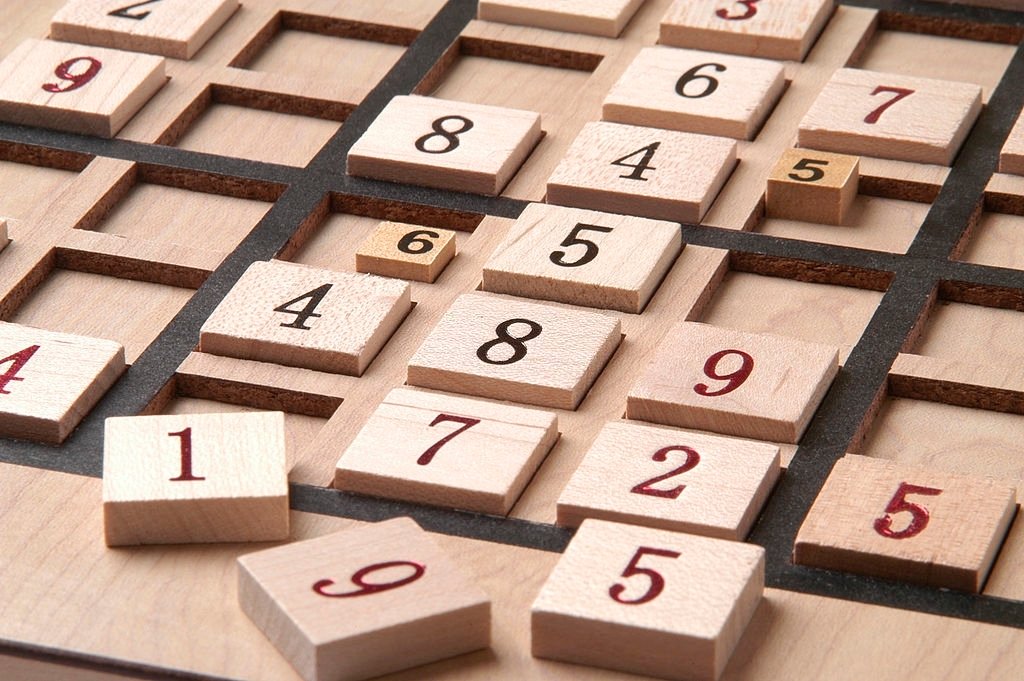 Sudoku Sue De Coq is a Clustering Counting variation initially introduced by a user with the pseudonym “Sue de Coq” as “Two-Sector Disjoint Subsets,” which is a bit of a mouthful. However, other users quickly began to refer to the approach as “Sue de Coq” (SDC), the inventor’s moniker, and the term has stuck ever since. The approach is simple in its most basic form, but it has been improved upon multiple times.

I have also shared a reference video in the end so if you are someone who doesn’t like to read the article’s then you can watch the video directly from our site without going anywhere else.

Because we recognize Locked Sets, this exotic method is tightly connected to simple patterns like Naked Pairs and Naked Triples. The construction pieces are Almost Locked Sets, but the alignment of these parts is the most intriguing feature.

We can take the following steps in order:

Image of a Sue de Coq 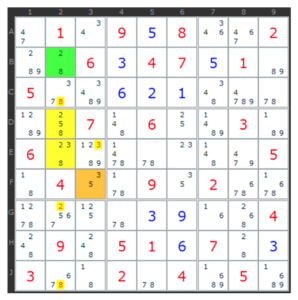 Sue-De-Coq, called after the forum handle of the intelligent man who discovered it, begins with an AALS that must be aligned in a row or column AND completely enclosed within a box. As a result, the AALS group is limited to two or three cells.

The two yellow cells (N=2) in the first example contain 2,3,5,8, which is N+2, or four possibilities. Box 4 is where the group is kept. We are unaware of the value 2,3,5,8; either which one will answer D2 and E2, but we may be certain that two of them will be. We can now locate single cells with two possibilities if we look along with the alignment unit in column 2 and within the box. 2,8 (the green cell) is found in B2, whereas 3,5 is found in F3. These cells are visible to the AALS, which is crucial!

The reasoning goes like this: If neither 2/8 nor 3,5 can complete the AALS, another combination must be used to fill it, leaving a digit open for the single bi-value cells. As a result, 2,3,5,8 must successfully occupy all colored cells. Because the overall group has four cells and four candidates, we’ve classified it as a Locked Set. This suggests that all candidates X who view all X in the whole group can be removed. This eliminates the 8 in C2 and J2 (aligned in the column), the 2 in G2 while the 3 in E3 both of them are alligned in the columns (shares the box). 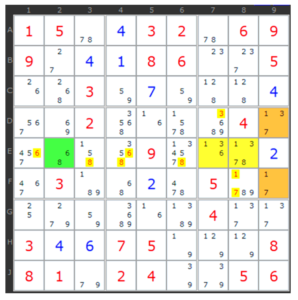 Example of a Load or: From the Beginning We identified a four-cell Locked Set in the example above, a rather simple pattern. Sue-De-Coq can also be utilized in more complex designs, such as the second one. To build the 4-cell locked sets in the first example, we used bi-value single cells as ‘hooks.’ Bi-value cells contain two candidates in one cell; they are Almost Locked Sets by definition. Sue-De-Coq can build the pattern with bigger ALSs.

In broad terms, the pattern’s rule is as follows:

If you can locate two Bi-Value Cells that,

If two of the Cells common to Square-1 and Row-2 only include combinations of the Candidates present in the two Bi-Value Cells, these four Cells create a Sue De Coq Type 1 pattern.

The removal of such a pattern is possible when;

Except for the cells that are part of the pattern

Indeed, the pattern’s four Cells only include combinations of four Candidates who view each other. Each of these Candidates must be the answer in one of the pattern’s Cells. When “Row” is replaced with “Column,” the same logic applies. 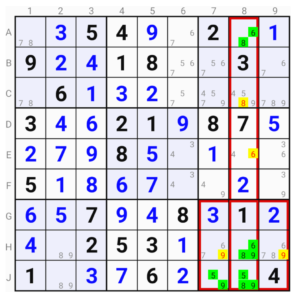 If you can locate two Bi-Value Cells that,

If the Cells common to Square-1 and Row-2 only include combinations of the Candidates present in the two Bi-Value Cells plus one extra candidate, the pattern Sue De Coq Type 2 is formed. The removal of such a pattern is possible when

except for the cells that are part of the pattern

The pattern’s five Cells only contain combinations of five Candidates who view each other. Each of these Candidates must be the answer in one of the pattern’s Cells. When “Row” is replaced with “Column,” the same logic applies. 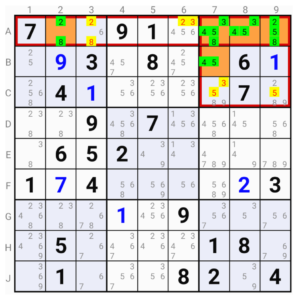 The Techniques Of Sue De Coq

This strategy was first mentioned on the Sudoku Players’ forum by a member named Sue de Coq, who called it Two-Sector Disjoint Subsets, but a statement that this was a real Sue de Coq gave it its current name.

This approach may be expanded to create Three-Sector Disjoint Subsets. However, this is a very uncommon use. The Sue de Coq method is demonstrated in the image below; 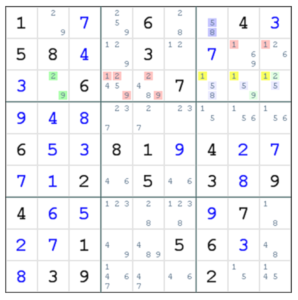 Sue de Coq is a graceful and successful strategy that frequently results in several eliminations. Yet, despite this, the method is rarely employed.

Sue de Coq is the name given to an elimination procedure by its creator in a forum post. One of the strategies to search for in a scan of every box of the line-marked grid is Sue de Coq or SdC. The original form and other comparable variants that are ideally suited for the bv scan are described first.

To track down a Sue de Coq Scan the bending areas, the intersections of box and line, the box and line remainders, and the chute (wall) with four matching possibilities.

When the genuine contents of the chute can be stated using the logical formula N(a+b)(c+d), where N is considered as a clue while the digit two is considred as a remainders include an ALS with value groups a and b, and another with value groups c and d, you have an original SdC.

One of the two chute cells accessible to candidates must have the letters an orb, while the other must include c or d. There are two possible logical expressions for the chute candidates. Only one of an ALS’s values can be given up; therefore, those in the ALS remainders alternate in the chute. Extra candidates in each remaining group, but outside of its ALS-matching chute, are eliminated. Extra applicants for the chute are weeded out.

Instead of a hint, a slink or aligned triple in one candidate satisfies the logical expression. Thus, for candidate N to be present in the chute solution, it must be present. 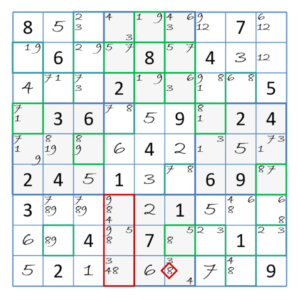 Frank longo’s Nasiest Book regarding Sudoku contains an example of the original SdC.

The Sc4 chute has been identified. The certain number is nine, and there are other options for alternates. I merely check at the remainders for matching ALS when a chute has enough numbers. Sc4 = 9(3+4)(5+8) has Bv accessible.

Both chute and bv 58 in the box remaining share the numbers 5 and 8. Therefore, the additional eight candidates are eliminated. The bv 34 requires 3 and 4 to alternate in the chute in the line remains, but there are no other candidates to remove. It demonstrates why the bv is the most effective ALS for Sue de Coq.

The original Sue de Coq is available in two variations. One arises when two values, generally two hints, must be present in the chute. To drive alternation in the single free cell, just one ALS is necessary.

The SASdC or Single Alternate SdC trial is a second single alternate form, with just one matching ALS in the remainings. In addition, a second word is added to the logical formula for chute contents to account for the chance that one set of alternatives is absent from the chute. The SASdC is discussed in further detail in The Guide’s Trials section.

The generalized SdC requires at least one cell in each remainder with candidates of these values alone, with two or three cells (c) to fill in the chute and at least two more values (v >=4 or 5). These are known as DJ cells. The values in the remainders’ DJ cells must be distinct.

The chute values that aren’t in each remainder’s DJ cells can then be removed from the non-DJ cells of the other remainder.

On the forum and many expert websites, Sue-de-generalized Coq’s version was the ideal technique to include cells with more than two values in Sue de Coq. Hobiger’s explanations of the cases mentioned above, for example, are based on the generalized version. When more DJ cells can be located, the fundamental reason for the generalization is to enable more than 4 or 5 candidate values in the chute.

Sudoku disagrees because total employment by ALS beyond the bv appears to have greater focus and is almost as successful as the generic SdC. In addition, multiple DJ cells in a leftover are likely to be ALS because they are restricted to the values of the chute.

The examples above demonstrate how the ALS form meets the subtle criteria of generalized ALS. As the ALS loses a matching value to the chute, the remaining ALS typically contains additional values that become stuck in the ALS cells. Thus, in the remainder, all alternative options for these locked values are ruled out.

Andrew Stuart’s The Logic of Sudoku is used as a final example. Andrew uses this example to illustrate Sue de Coq in general.

There are six values in the chute, but no certain numbers. Therefore, three DJ cells of 789, 89, and 23 provide generalized coverage of the three chute cells.

Recognizing that the ALS 789 may only release one value, the contents of NW r1 can be described as NWr1 = 5(2+3)(7+8+9). Thus, there is just one chute position that can hold five people. The other two values are locked in the ALS, resulting in eliminations, regardless of whether the matched value is 7, 8, or 9.

I highly recommend you to take a look at this video, you’ll learn a lot from this video.