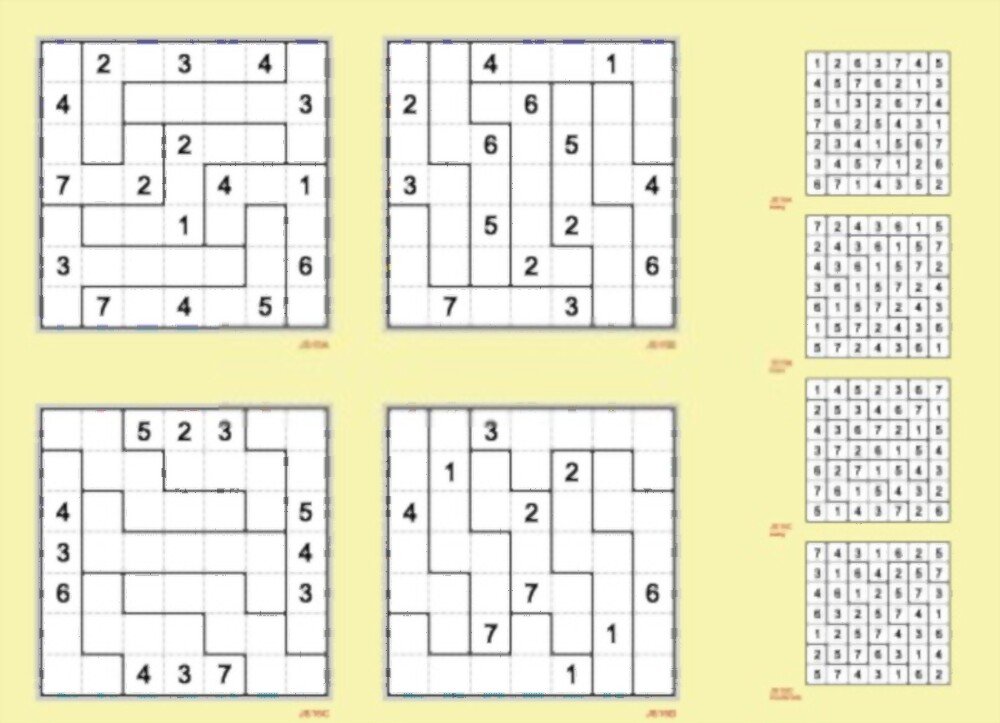 It’s an abbreviation for “digit-single.”

The goal of this traditional Sudoku game is to complete a 9-by-9 grid with numbers such that each row, column, and each of the grid’s nine 3-by-3 sub-grids, often known as “boxes,” “blocks,” or “regions,” has all of the numbers from 1 to 9.

The puzzle setter provides a partially finished grid with a single solution for a well-designed puzzle.

Jigsaw Sudokus (also referred to as Irregular, Geometric Sudoku, or Nonomino) are similar to ordinary Sudoku puzzles in that they are broken into irregular jigsaw-like forms rather than 3×3 blocks.

All numbers 1 through 9 are represented in each row, column, and jigsaw shape. This puzzle is amongst the most popular and enjoyable Sudoku varieties.

One of the most interesting aspects is that various grid types present a distinct collection of areas and hence a novel puzzle each time.

The rules of traditional Sudoku apply here as well, with 1-9 appearing once for each row-column; however, in this case, irregularly shaped thicker lined set of 9 cells.

Yet, there is one single rule that you might find yourself employing more frequently than in regular Sudoku, that’s region intersection removal.

The key to resolving jigsaw Sudoku is, of course, to make use of all the shapes in various areas.

Those that stretch across a big no. of boxes in another region (intersect across those cells) are very beneficial.

Let’s see how this works in practice. 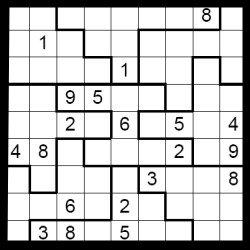 This leaves only three boxes in row 1 that possibly contain a 1, but cells 1 and 2 can’t either because a 1 has been placed in R2C2, which includes cells R1C1 and R1C2.

This leaves only one cell in row 1 that can hold the one, and that is the last cell, R1C9, that we place it in.

Looking for implementations of this technique at the beginning of the puzzle can be the key to swiftly inserting values in the jigsaw.

Using the simple logic, we can immediately place the ‘6’ in row six, and it pays rewards to take the time at the beginning of the problem to hunt for digits that must go in a certain cell in a row, column, or box.

The 5 in row 6 can alternatively be placed immediately.

As a result, we can say that R4C5 and R4C6 must be 4 and 8, respectively, and we can indeed mark 48 as the pencil marks in those boxes.

We may exclude 4,8 as possible options from all other squares in row 4; this indicates that the 8 can now be inserted in row five, allowing us to arrange the 4 and 8 precisely in row four.

The hardest part is figuring out when and how to apply the techniques to jigsaw Sudoku.

Many people miss very simple eliminations as they get used to the puzzle, making it more challenging to solve.

The trick is to examine the geometry of the jigsaw sections and determine how they can remove numbers from other cells.

For example, if an area is L-shaped, placing values from the base of the L means they can’t show up in the long body of the L, that is in some other region, hence in that region, you’ll only be left with a few feasible cells for that number to go, keeping in mind that it should be placed at least once in that region as well.

The key is to analyze the shape of regions and see how you can use them to help you to make quick eliminations.

The shape of the grids in Jigsaw Sudoku makes it appear complicated. 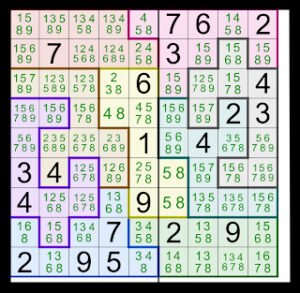 This distributes the grid into two sections, naming them as the left and right sections.

When we examine the grid, we can see that two cells from the left (R6C6 and R7C6) extend (Go Out) into the right half, while two boxes from the right (R1C5 and R8C5) extend (Come In) to the left. 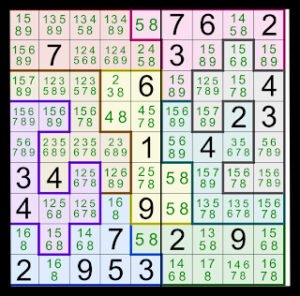 Once the pencil marks are changed, we can see that Column 5 has a hidden single 3 for R9C5. Except in R9C5, there is no position in Column 5 for number 3.

Take a thorough glance at the shape of the jigsaw areas at the beginning of the puzzle, and see if you can notice any jigsaw regions that overlap many of their boxes with a row or column. 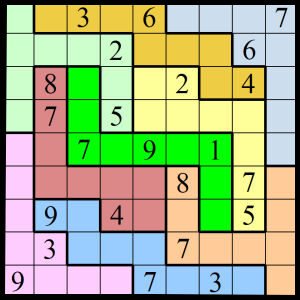 To achieve progress, you will frequently need to follow the implications of things you see.

For example, there is a provided number 3 in the pink zone at the bottom-left of the grid in the sample grid. This pink zone has five squares in common with column one.

As with regular Sudoku, take a thorough examination for the numbers that appear the most frequently in the first position and check if you can make any immediate progress as a consequence.

6 of the nine 7s have already been provided in the example grid.

Observe column 4; only one square would be left that can accommodate the 7.

Can you spot where?

There is a great method for Jigsaw Sudoku that you must be aware of – and it makes use of the irregular shapes of the cells.

It is referred to as the “Law of Leftovers.”

Bob Harris invented the approach. The method is based on the principle that the same number of houses should have an equal number of occurrences for each number.

Finding the optimal sites to apply this strategy may be challenging, but there is a strategy for quickly identifying the most potential regions in the grid.

Find out borders between columns or rows that are similar to jigsaw borders.

In the image, the boundary between columns 6 and 7 comprises 5 cell borders that are likewise jigsaw regions border. 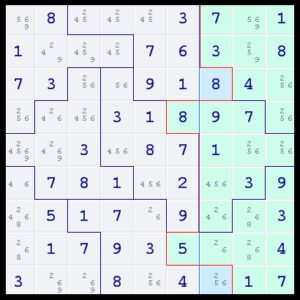 Draw a line that separates a specific no. of jigsaw squares.

Then, draw a line that separates the same no. of columns or rows as before.

Identify the jigsaw regions that are not split by rows or columns.

Determine which sections of the leftover regions are contained within the separated columns or rows.

Check that the no. of outies and innies is equal.

Contrast the innies and outies.

According to the Law of Leftovers, the innies and outies in the solution have the same numbers.

When all outies are on the same line, a digit that needs to be inserted in one of the outies can also be removed from other boxes located on that line.

Try the online version of these puzzles.

Jigsaw Sudokus are similar to ordinary Sudoku puzzles, but they are broken into irregular jigsaw-like forms rather than 3×3 blocks.

All numbers 1 through 9 are represented in each row, column, and jigsaw shape.

The rules of traditional Sudoku apply here as well, with 1-9 appearing once for each row, column.

There are a lot of strategies being employed to solve Jigsaw Sudoku.

The key to resolving jigsaw Sudoku is to use all the shapes in various areas.

However, “Law of Leftovers” is a great method for Jigsaw Sudoku that one must be aware of to enjoy this best logic-based game.