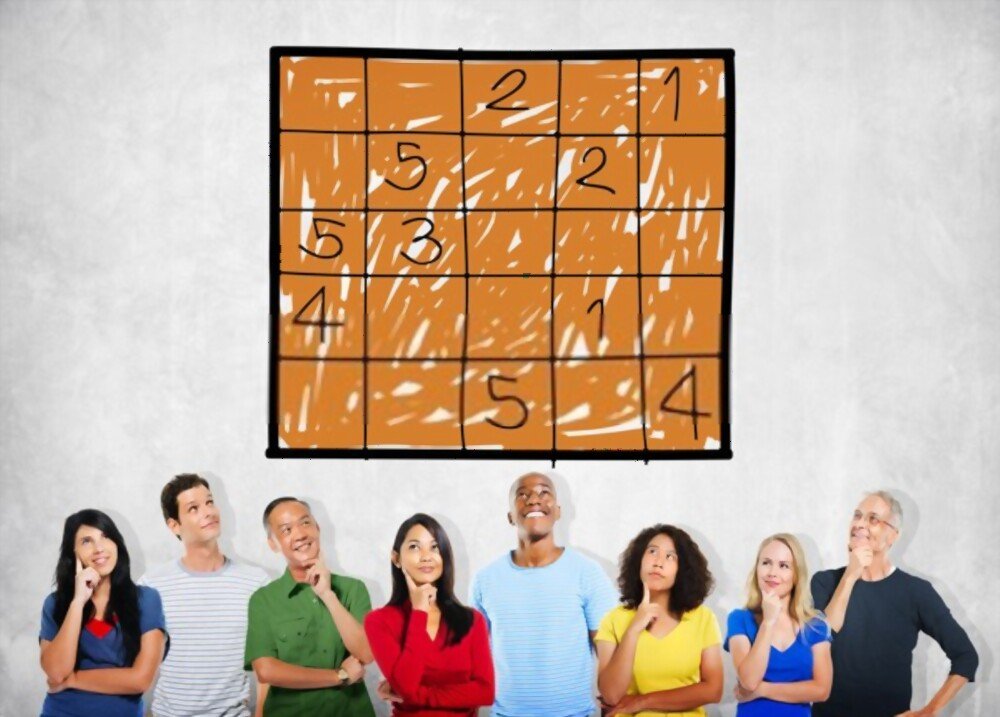 There is something incredibly appealing about Sudoku: the game provides challenges to both experienced puzzle players and neophytes alike. Sudoku solver who is a beginner and an experienced Sudoku solver will have to consider and use a good technique every time they play a puzzle suited to the level they are at. However, their approaches may differ. It takes quite a different set of strategies to solve a hard Sudoku puzzle compared to an easy one. In this article, we will examine nine techniques of this type, arranged in increasing difficulty.

Most professionals begin by using basic techniques when using these strategies. Put as many numbers in as you can by using the first few techniques. After you run out of number addition techniques to use, move on to the more advanced ones. Plot one cell by one until you finish. Then begin by repeating the basics again. The techniques provided here should provide a solution to most Sudoku puzzles.

Using these techniques, numbers can be removed and hence Sudoku can be solved:

A “sole candidate” is a number that can only be contained in a specific cell. In either the current row, column, or block, all numbers except the candidate number are present. Using the above image, only the number 5 can be found in the red cell as the other eight numbers are present in the related blocks, columns, and rows. 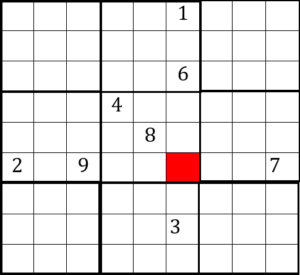 The numbers 1 to 9 must appear in every block, row, and column on a Sudoku board. In other words, if there is only one cell in each block/column/row where a number, say 4, will fit, then the number will fit only there. As can be seen in this example, that cell marked in red contains the unique candidate for the number 4. 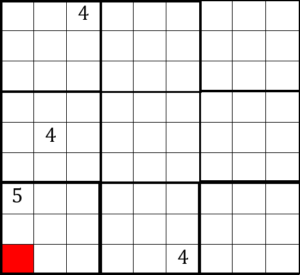 Sudoku Solving Techniques for getting rid of numbers:

Interaction between blocks and columns or rows

Although you will not be able to jot down any new numbers using this method, you will be able to pin down a specific number within a particular row or column. This example illustrates that the number 7 can be inserted only into the middle row of red cells. From the remainder of the row, you may remove 7 as a possible candidate. 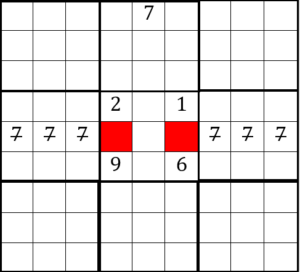 Analyzing the example provides the best insight into this technique. The number 8 needs to appear in one of the red cells in the middle and the middle left blocks. In the middle-right column, we can now eliminate 8 from the upper and lower rows. 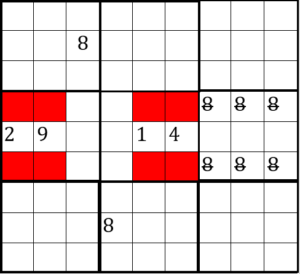 Using this approach with more than two candidates is also possible. Let us suppose, for example, that the pair circled in red were instead triples of 1, 4, and 7. Accordingly, those three numbers should either appear in rows 1, 2, or 5 of the sudoku table. Any of the remaining cells in the column can be eliminated as candidates for these numbers. In addition to two possible candidates in two different cells, this works with four potential candidates in four cells. 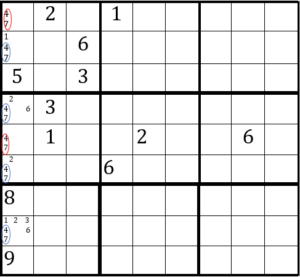 You can use this method when viewing cells forming rectangles, such as the cells in red. Suppose that the number 5 is the only candidate number in the red and blue cells in the example. Consider the situation where only the red cells in columns 2 and 8 can contain 5. 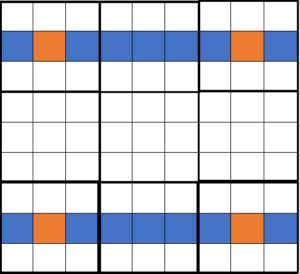 In contrast to X-Wing, Swordfish has more complicated rules. The technique appears to be a lot of work for very little pay, but in some cases, it is the only way to solve a puzzle. Then keep reading if you wish to become an expert at solving sudoku! 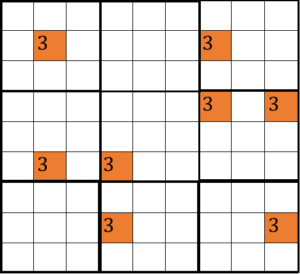 Example 1
Consider the first example, in which a number 3 is plotted among candidate cells. Now suppose only the cells marked in red can contain the number 3 in columns 2, 4, 7, and 9. There must be a 3 in each column. 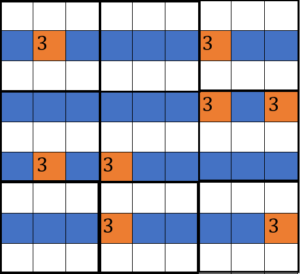 Example 2
The second example illustrates the point. Across every cell in blue, we can eliminate 3 as a candidate. In the third example, the number 3 is placed in the green cells, and in the purple cells, because the number 3 can be placed in either of the two possible locations in the red cells. All columns 2, 4, 7, and 9 must contain at least one 3 in a colored cell, so there can be no 3 in any other cell within those rows. 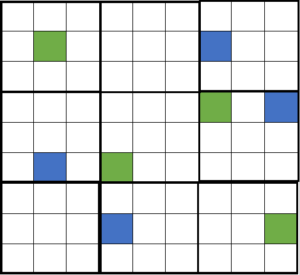 Example 3
Is there a way to recognize swordfish patterns? Look for cells that share a similar candidate number that can be chained together. Take a look at the red cell in the top-left corner. Once you reach another cell that contains the same candidate number, you draw either a vertical or horizontal line. Afterward, you repeat the process until you reach your starting point. Reaching the original cell results in a swordfish pattern! 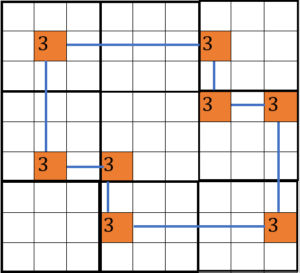 By using a forcing chain, you can actually find out what number a particular cell must-have. There are some drawbacks to the technique, however. The example below provides a visual representation of this. We will assume for the purpose of discussion that the candidates present in the red cells are the only candidates.

Starting with the red cell with the arrow pointing towards it, fill in either 3 or 6 by clicking on the corresponding icons, respectively. Continue to fill in the next round of red cells. Throughout the process, you will need to remember the values you entered. Backtrack to the first cell and try the other candidate number for that cell, along with any other red cells. Take a look at the result you have now and compare it to the first result. A specific number must appear in both cases.

With the starting cell set to 3, you can see that the rightmost neighboring cell must have a 9. Put 6 in the starting cell instead, and then move in the other direction to enter candidate values. The above-right neighbor is a 9 again this time around. It must therefore contain a 9. 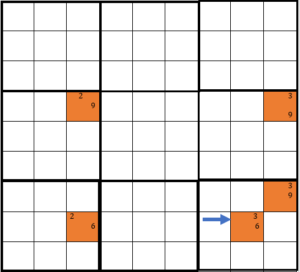 There you have it. You should be able to solve even the toughest sudoku puzzles after reading this. Wishing you luck!