Have you always wanted to explore Sudokus, but had no idea where to start or how to play?

Then this is what you’re looking for.

We will explain how to play sudoku step-by-step here! 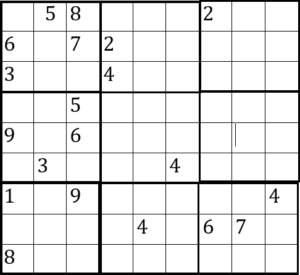 To begin, you must understand the sudoku grid

Sudoku puzzles are composed of a 9×9 grid of squares divided into 3×3 boxes.

The sudoku grid has 81 squares, and after the puzzle is complete, every square will have exactly one number.

The second step is to know the rules

The numbers from 1 to 9 will appear in every row, column, and 3×3 box exactly once, once the puzzle is solved.

The rule is that no number can repeat itself within a 3×3 box, row, or column.

There are some squares in a sudoku puzzle that already have numbers in them when you start.

Specific numbers will be locked into specific squares depending on how challenging the puzzle is. In other words, squares where only one number can fit without breaking any rules.

For instance, only the number 2 can be placed into the square below. 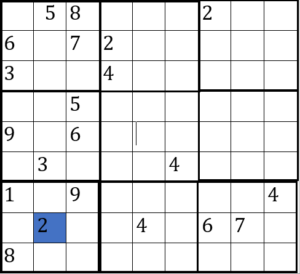 As a result, 2 is the only number that fits in this square.

The more the grid is filled in with single-digit numbers, the more it will help to ‘lock in’ other numbers to additional squares.

By adding the 2 to the 9*9 box on the bottom left, we also signaled the location of the 2 in the top left box, which is highlighted below in the bottom-right cell. 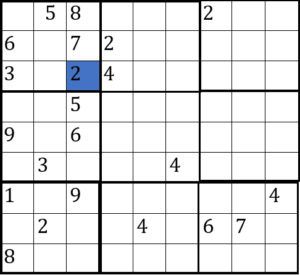 Since we added 2 in step 3, we can no longer use 2 in the middle column of the box. Additionally, this rule also eliminates the possibility that the first two rows of the top left box may also contain a 2.

As a result, only the bottom right cell of the top left box is left for the 2.

You’ll run out of possible numbers to lock in for certain unless you complete a grid designed for beginners.

By this time, you will know which candidates for various cells may be suitable. Jot them one after another.

You represent possible numbers for each cell by using pencil marks based on the information you have at hand.

To illustrate, in the example from the previous section, by adding pencil marks for the number 4 in the three left boxes, we have been able to locate one of the fours.

We have already removed all 4s from the grid, except for those three left boxes to which we added pencil marks, as shown below. 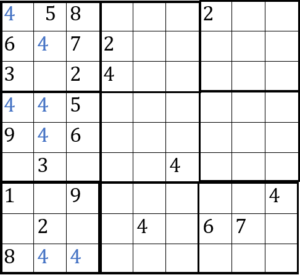 In these three boxes, there is only one possible place for the 4s. You might have already noticed this.

Due to the fact that column three must have the number 4 exactly once, and that this is the only cell in column three to have a 4, we can make the conclusion that number 4 must appear in this cell. 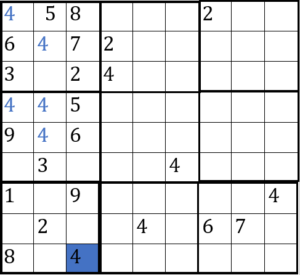 Keep going with these Tricks until the Sudoku is solved

It will take you only a few minutes to fill in all the cells in the grid if you repeat these steps.

While you may need to learn additional techniques to solve more complex Sudokus, we recommend you practice with these steps now by solving easy and moderate sudoku puzzles.

Check out this puzzle book for more practice!