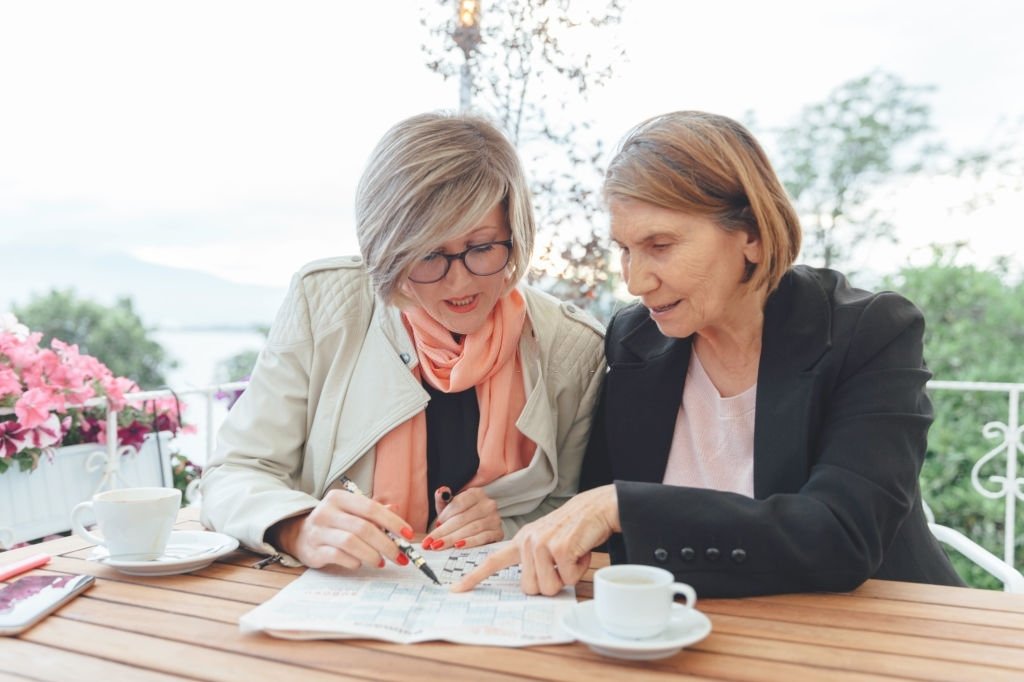 As with Naked Subsets, Hidden Subsets may be extended to triplets, quads, and so on.

Consider any huge container. If naked subsets split it into two or more parts, then the sections of that container that are disjoint from those naked subsets must be occupied by hidden subsets.

Consider the following logic: If a set of N candidates is confined to N cells inside a big container. Then those cells can contain only those candidates in the set.

As a result, all candidates who are not members of the set may be securely excluded from those cells.

An example of a Hidden Pair is shown below. 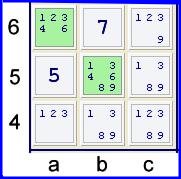 In this example, observe that the 4’s in box b5 are confined to two locations: a6 and b5.

Note that the 6’s in box b5 are restricted to the same two spots.

Hence, we may restrict anything 4,6 from cells b5,a6. The astute amongst you may remark that we also have a Naked Quintuple with candidates {12389} at cells abc3,c56.

This concept might be shown in the following way:

Again, the technique of presenting this phase in a proof is also not universal among provers and often not even uniform inside a prover.

With all n-tuples, not all candidates need to appear in all the cells, as in the latter example stated above with candidates 1,2,3.

Hidden pairs are one of my favorite setup techniques. They are often simpler to locate before entering any possibilities.

A hidden pair emerges when a set of digits appears in two consecutive squares in a row, column, or block, but those two numbers aren’t the only ones in their squares.

All Hidden Subsets function the same manner; the only thing that varies is the number of cells and candidates impacted by the shift.

This method can eliminate a cluster of candidates from two cells, leaving behind simple pairings that may be used to develop more complicated elimination techniques.

Consider the Hidden Pair: If you can discover two cells inside a home where two candidates exist nowhere else in that house, then two candidates must be put in those two cells.

As a result, all other candidates may be eliminated.

Candidates 2 and 7 in the above example are only permitted in Cells G7 and G9 of Row “G.” If candidate 2 is the G7 solution, then candidate 7 must be the G9 solution.

If candidate 2 is the answer in G9, candidate 7 must be the solution in G7. As a result, Cells G7 and G9 must have a solution of 2 or 7; all other possibilities may be removed from G7 and G9.

Example of a Hidden Pair 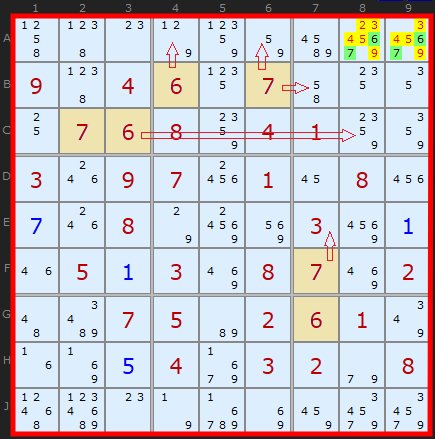 Looking up at the top of this moderate puzzle, we see that the numbers 6 and 7 have been located in the first two boxes. This, along with the 6 and 7 in column 7, ties the 6 and 7 in the third box to A8 and A9.

To some extent, it looks like there are many choices in A8 and A9, which is correct. However, these additional possibilities ‘conceal’ the genuine values for these cells.

Therefore, we’ve determined that 6 and 7 must be in A8 and A9 to eliminate all options. Of course, this doesn’t imply we can predict which direction the 6 and 7 will travel, but we can make 6 and 7 a Naked Pair in those cells and monitor where it takes us. 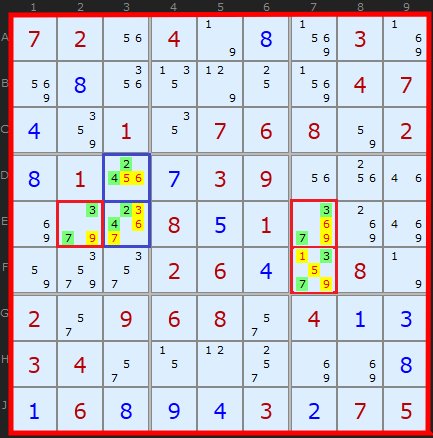 This Hidden Pairs set is more fascinating and challenging. Three things happen at once. First, [2,4] create a Pair on D3 and E3 in the blue rectangle, removing 3, 5, 6, and 7.

The red cells represent two Hidden Pairs based on [3,7], making a clean three-cell corner. Second, [3,7] only appears in two rows in row E and two cells in column 7. Finally, the highlighted yellow cells may be deleted.

How to Locate Them 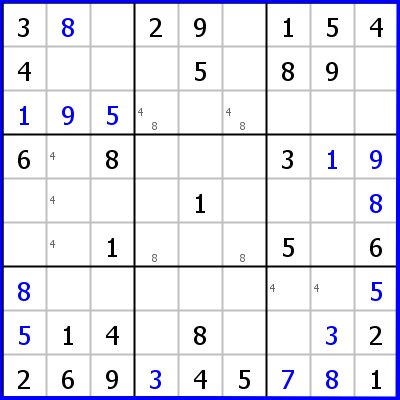 Using pencil markings, you may quickly find Hidden Pairs. Examine the sudoku puzzle: For candidates 4 and 8, a few single pencil markings were applied. The Hidden Pair in r3c46 is instantly obvious. There is no other applicant who can enter one of those cells.

As a result, many players prefer utilizing bigger Naked Subsets over larger Hidden Subsets after pencil markings have been placed, although this is, of course, simply a matter of preference.

However, similar to Naked Triples, we don’t require precisely three pairs of numbers in three cells for the laws to apply.

Only three numbers remain in three cells; therefore, [4,8], [4,9], and [8,9] are all equally acceptable. ; thus, Other candidates on those cells will hide hidden Triples; we have to pull them out by confirming the Triple applies to at least one unit.

Candidates 3, 4, and 9 in the above example are only permitted in cells A6, A7, and A9 of Row “A”: three candidates for three cells. This is because no other candidate can answer in any of these cells. 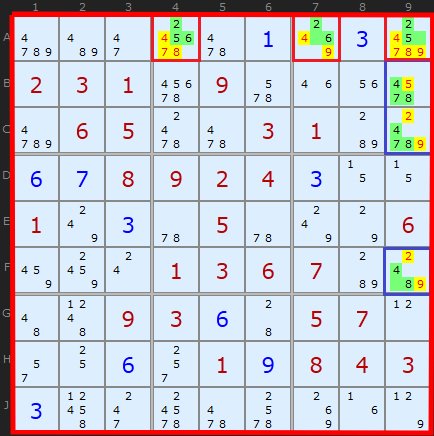 As a result, we can eliminate the other choices.

Now that those possibilities have been excluded from the red cells, we observe in column 9 that [4,7,8] is distinct to cells B9, C9, and F9.

Therefore, we can exclude additional possibilities in those cells using the same rationale.

(The solution will not choose the second case since Naked Triples arrive first.) 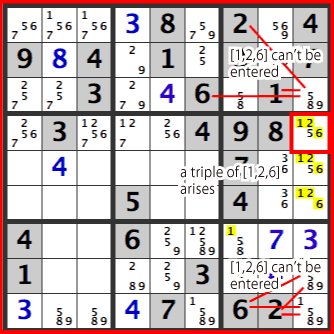 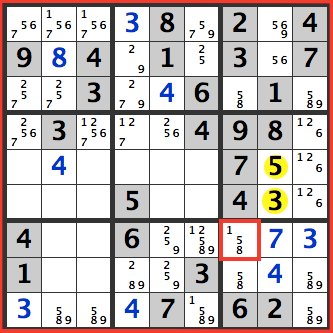 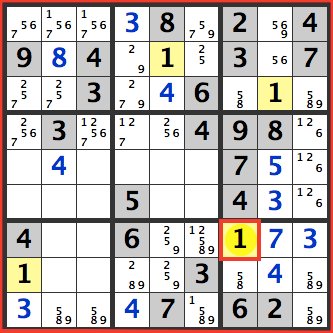 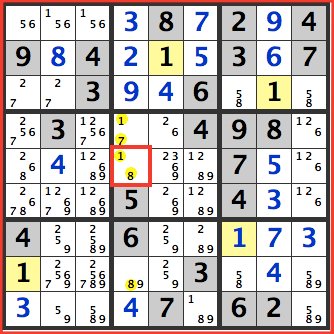 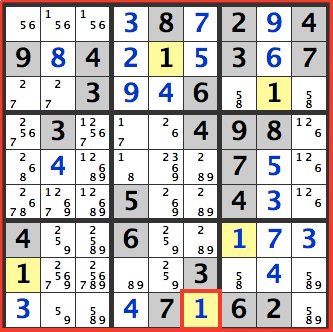 Quads are also made up of four digits, although we couldn’t identify a particular example of this.

So again, it will seem that there are numerous possibilities, but this strategy will work if a number cannot be put in any of the other cells.

We can extend Hidden Pairs and Triples to Quads and beyond, just as we can with Naked Pairs.

These are difficult to notice!

It’s a little tricky, but it’s a useful strategy when you’re stuck.

A Hidden Quad is a four-dimensional Hidden Subset.

Hidden Quadruples (4 candidates in 4 cells) are uncommon. It is quite difficult to identify them without the use of pencil markings.

Hidden quads are uncommon, and they might be difficult to find unless you are searching for them explicitly.

Here’s an example of a Hidden Quad.

I discovered it among 18,000 Sudoku puzzles.

Hidden Quads nearly usually appear in rows, columns, and boxes with no hints or answered cells; thus, you may be excused for ignoring them in other cases. 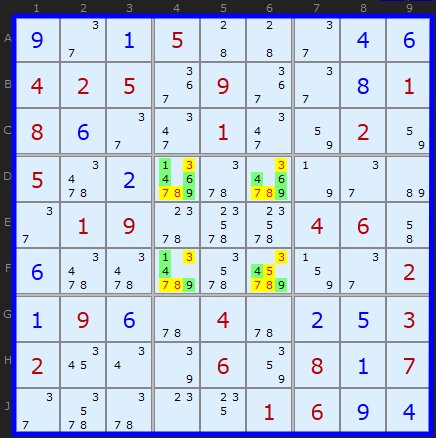 Klaus Brenner from Germany discovered a lot of amazing Hidden Quads, and I’ve included one here to demonstrate that they exist.

In box number 5 there are four hidden quads (1,4,6,9), and each of them can only be found in four cells [D4, D6, F4, F6]. As a result, additional possibilities (red text on yellow background) may be eliminated.

We don’t explore higher possibilities due to the availability of 9 cells in a unit.

So, if we consider a “Hidden Quin” with five candidates, there must be a corresponding Hidden Quad since 5 + 4 = 9. The same issue happens with Naked setups. It’s possible to find such animals in 12×12 or 16×16 Sudokus.

Thankfully, just a few puzzles need the discovery of a hidden quad to be solved since they’re notoriously difficult to identify and devilishly difficult to solve!
Even with the highlight to help you know where to search, it may take you to find the quad! The hidden quad is an uncommon beast that is seldom seen in captivity!