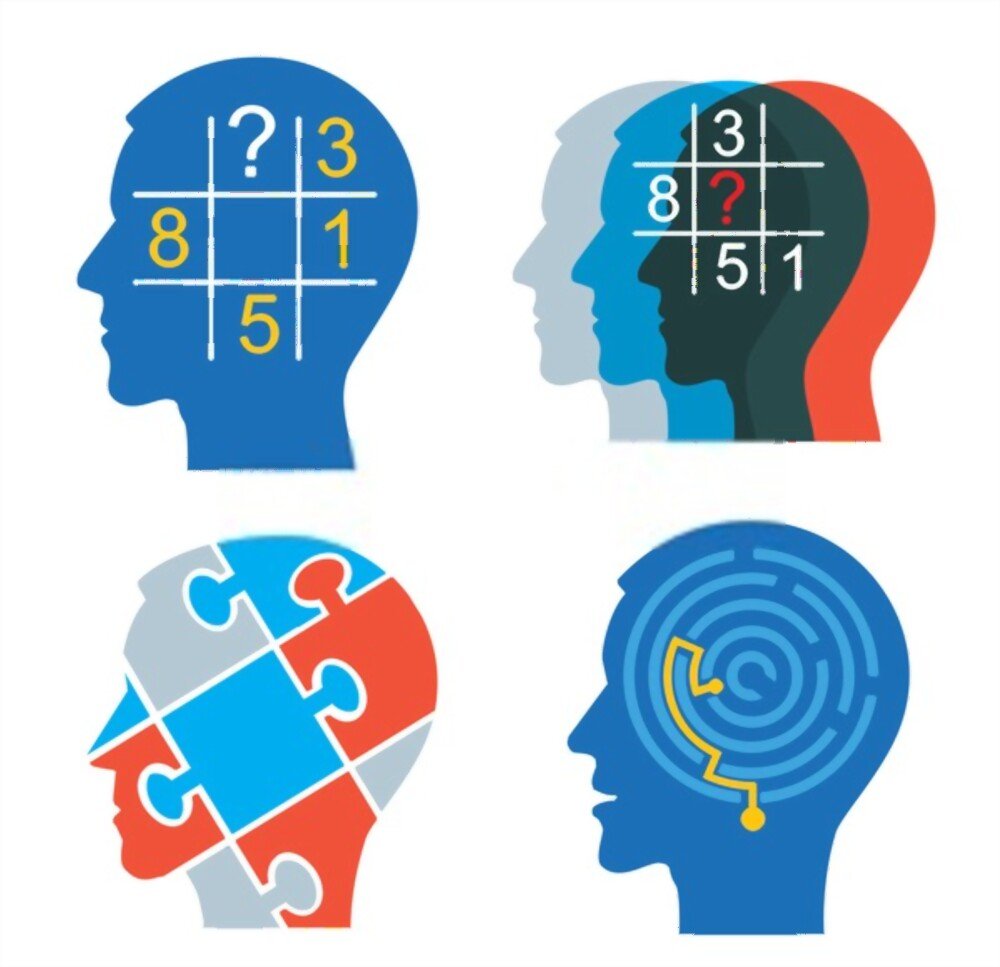 Please stick with us till the end; you’ll get to know a lot of tips & tricks regarding this strategy.

It is also termed Finned X wing, and it generally consists of a fin containing a box with X wing as a component and no candidates

It is also named a regular X wing, and it is not possible for this particular wing set to cover one or more than one base candidate by a cover set. It’s a basic fish (general rule) that only cover candidates get elimination. However, some restrictions are assigned already in this particular game type, but let me tell you the main point that puts most people in confusion: only base candidates get elimination, not cover candidates if they have seen all of the fins.

Now let’s come to the matter of transformation that how finned fish transform into Sashimi, what are the main reason’s behind it. The main reason behind this concept is degeneration in the rest of the fish when not even a single fin is considered true.

Let’s dive down into the core details of fin elimination; let’s learn this through an example.

In contrast, the second one includes the solution, in the case in the second row where two cell’s correspond’s to each other in different columns. If the candidate existence belongs to the exact-similar Square, this leads to the fin’s formation in extra cells. The candidates that exist in the exact similar Square-like fin while remaining in the corresponding column’s of the rectangle corner’s then the fin elimination occurs.

Undoubtedly, in the first row, if we successfully spot the candidate as a solution, then the outcome will be in the elimination of that particular candidate in the corresponding columns of a single row.

In case if we spot the candidate as a solution in a different cell other than the previous one while remaining in a single row, then the solution will be in the fin. The outcome will be in eliminating that particular candidate from the rest of the cells of the exact similar Square. 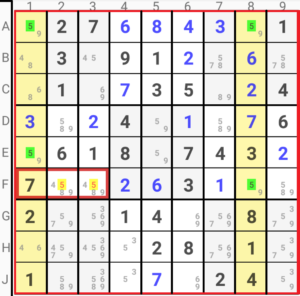 As you can see in the example, the elimination of all those candidates that contain the digit 5 in row F occurs as a result of candidate five as a solution in F8. It is also the solution either in A1 or in a fin.

The same is the case with the next part elimination in the rest of the square 4 cells occur as a result of E1 and A8 as a solution.

The interpretation of this particular X wing type is commonly observed in two ways. Still, it is possible only if the fin that we can see in the given diagram contains a single candidate. 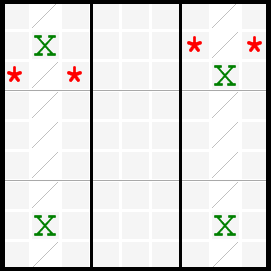 Formation of Finned X-Wing occurs due to extra candidate availability in r2c8 and r3c2, in case one means in r2c8 formation of finned/Sashimi-X wing will be in rows and column’s 2 and 8 containing fin in box 3

It’s a little bit complicated due to two hard and fast rules in this double fin-type, and without meeting both of these rule’s it is impossible to interpret this particular pattern.

We must have two candidates in the fin, and both of these candidates are in the same box 3. 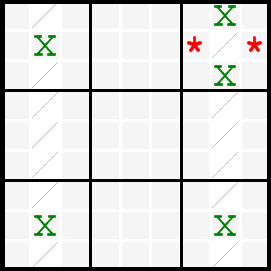 The working methodology of finned sashimi swordfish is precisely the same as the finned and Sashimi x wing. A minor difference in both of these finned sashimis set them apart. In this particular sashimi type, three

base covers perform functionalities instead of two. 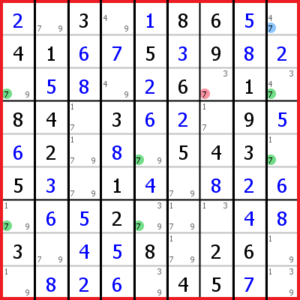 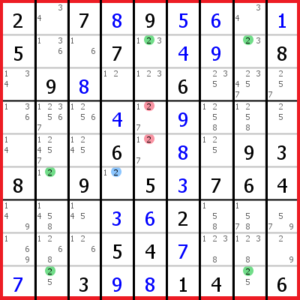 The left is a Swordfish with column 159 row 357, and the leftover base cell row 1 column 9 is called a fin. The termination of possible Swordfish without the fin is row 3 column 7, row 5 column 3, and row 7 column 6

of those, only row 3 column 7 shows the same fin box and can be terminated.

The right Swordfish is being looked at in rows 269, column 258 & the fin is in row 6, column 4. It can cover only two cells which show the fin in row -45 column-5, which can be terminated only two without the fin of row- 6 column-4; therefore, Sashimi would have a single in row 6 column 2.

In another way, if a specific candidate remains in three cells only in three rows as and when if these cells related to the same columns configuration a three by three rectangular pattern but except for one row where one of the cells is always called the sashimi cell. The three by three rectangular pattern is solved, or solution either beginning value or encouragement value as and when the candidate is also found remains in cells of that row related to the same Square as the sashimi cell. These extra cells are called the fin. Then now, the candidate cannot be the solution for any cell in the Square column consisting of the fin.

The candidate should not be remained in all cells of the same pattern, as long as the cells (where it is not staying) are solved cells, i.e., either consisting of beginning value or encouragement value. 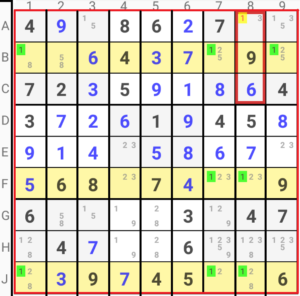 The sashimi cell is called B-8. The fin contains in cell B-9.

If candidate one is in the solution in F-8, then all the candidates’ one is terminated in column -8

The same is the case with this particular Sashimi type where four base cover sets fuse to form Jellyfish.

The candidate gets the finned sashimi jellyfish when he sums other base cover sets combined. 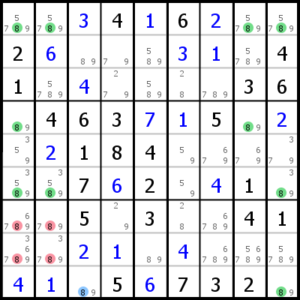 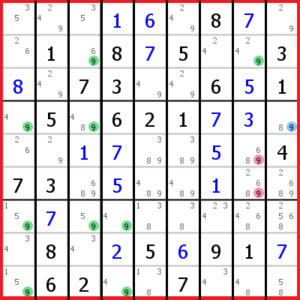 As shown in the left example, Finned Jellyfish row 2479, column 1348 & fin in row 4 column 9 cover cells row 56 column 8 shows the fin. If the fin is not valid, the fish will demote into a Swordfish, as seen in row 479, columns 134, terminating nine from row 26, columns 3. Therefore the Finned Jellyfish can also be called Sashimi.

Further, it can also be defined as under;-

A fish pattern is called a Sashimi Jellyfish, which is not in complete form. Extra candidates balance Jellyfish in a box cut across with one or more lines of the description set. It is called a single-digit solving technique.

Now look in a fish diagram which shows a Sashimi Jellyfish in the columns:-

The X form candidates looked an incomplete Jellyfish pattern with four columns having only candidates in 4 rows. This design would not be solid with only a single candidate in column-2 if the two candidates

looked as F did not remain. These candidates are called a fin. The F candidate is correct, or the Jellyfish degenerates into a single in row 6, column 2, and a Swordfish in the remaining three columns. The candidates looked like Star (*)

are removed in both cases, permitting us to terminate them from the grid. 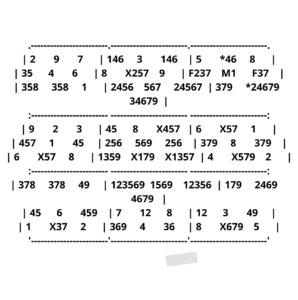 This grid consists of a Sashimi Jellyfish for digit 7 in rows 2, 4, 6, & 9. The taking part columns are 2, 5, 6, & 8. Cells look like X is the vertices of the Jellyfish, but the pattern is not complete. An unmixed Jellyfish would have seven as a candidate in row-2column-8 (the cell looked as M) and could not have Seven in row-2 column-7 and row-2 column-9 (the cells looked as F). A Finned Jellyfish would have seven as a candidate in both of F cells & the M cell. But the fins shown as F can stand in for the missed 7 in M in the same sense that the same termination as an unmixed Finned

Jellyfish still can do the job, which is called the Sashimi Observation. Thus seven can be terminated from row-1 column-8 & row-3 column-8, but the two cells looked like stars (*). In this context, only one termination is possible

for seven from row-3 column-8.

An unmixed Sashimi Jellyfish is challenging to find. Most of the vertices need to be pulled out to form, not complete Jellyfish. The design you see in the diagram is one of the only ways to less the Jellyfish. However, other depletion often leads to substitute terminations, which are easier to spot than the Sashimi Jellyfish. 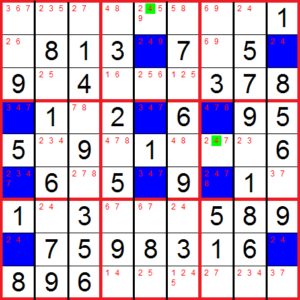 When it comes to this particular Sashimi type, it is not mandatory to do its searches; it is also termed correspondent fish.

The existence of this particular correspondent fish leads to the elimination.

Mathematic’s Of Sudoku by Wikipedia