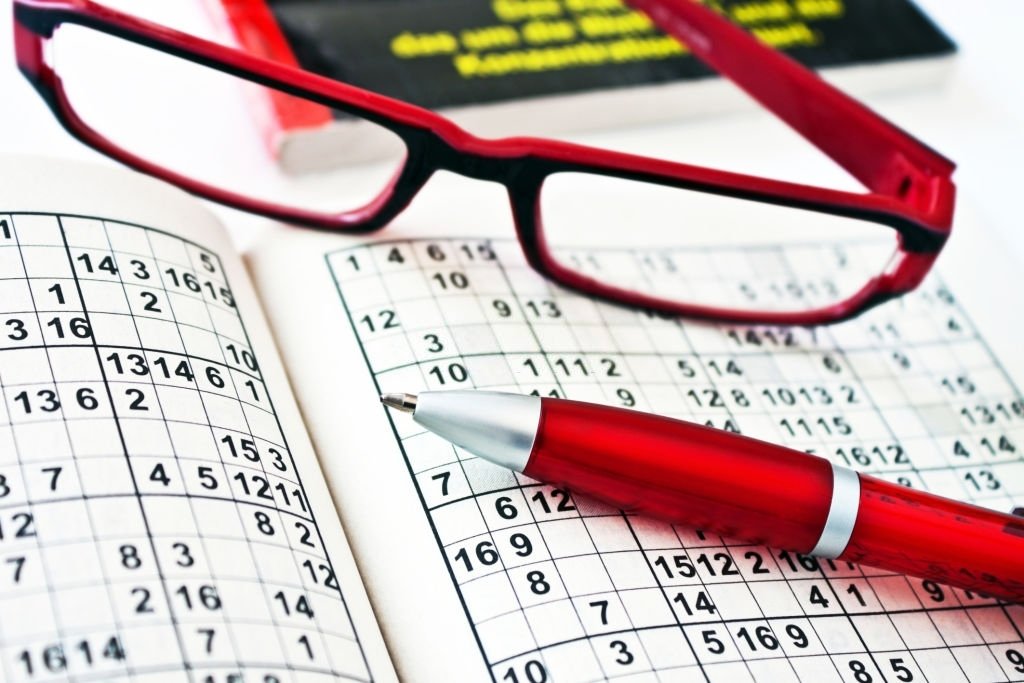 Every unresolved cell in a Bivalue Universal Grave (BUG) has two candidates, and if a candidate occurs in a row, column, or box, it appears precisely twice.

A BUG-Lite is a partial BUG pattern with comparable qualities to a BUG, such as all nodes in the pattern being bivalue and candidates appearing twice in a row, column, or box.

For the sake of this discussion, a poly-valued cell has more than two candidates.

A Local Bivalue Move (LBM) selects one or two candidates from a cell that results in each candidate in the 2-candidate selections in that row, Column, or box appearing precisely twice.

BUG(Bivalue Universal Grave) grids can have zero or several solutions, making them incompatible with a puzzle with a single solution. As a result, the non-BUG candidates must provide the puzzle answer.

Corollary 1: If LBMs can create a BUG from the list of candidates (without solving for any of them), the puzzle solution must include at least one non-BUG candidate.

Corollary 2: All non-BUG candidates in the grid must make valid deductions.

Corollary 3: Any candidate placement that eliminates all non-BUG candidates is an invalid move.

Corollary 4: Any candidate placement that pushes a grid into a BUG+1 is legal.

A Bivalue Universal Grave is a grid state in which every unsolved cell contains two candidates and no hidden singles. One of the Deadly Patterns that does not appear in a legal Sudoku is this one. It is also a problem-solving approach for certain folks. This method aims to avoid moves that can cause a BUG pattern to form by avoiding them.

Let’s define a Deadly Pattern as a grouping of candidates that leads to several solutions to a riddle. A problem with just two unanswered Cells having the same two candidates, for example, has two solutions. On the other hand, a valid Sudoku problem has a one-of-a-kind solution; hence completing it should not result in a “Deadly Pattern.”

Consider the candidates in that cell when you come to a circumstance where all unresolved Cells are “Bi-Value” Cells except one that still has three candidates. If removing one of them results in a Deadly Pattern (the other two candidates appearing twice in the row, twice in the Column, and twice in the square to which the cell belongs), that candidate must be the cell’s answer.

The only way to prevent a “Deadly Pattern” is to keep this candidate. 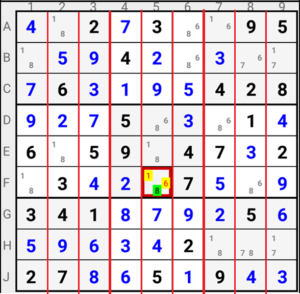 In this case, if candidate 8 was eliminated in F5, two options would be available:

The problem has a unique solution with candidate eight as the solution in F5.

Bi-Value Universal Grave is the abbreviation of BUG. This approach has been re-instated in the solver as of July 2015.

BUG is based on the fact that any Sudoku with just two options in all remaining cells is fatally faulty. There would have been three contestants in the last cell. To avoid the bi-value ‘Graveyard,’ the odd number that couldn’t be coupled with another cell would have to be the answer for that cell.

Peter Hopkins deserves credit for re-engaging with BUG. He was able to locate the initial conversation, which took place in November of 2005. Based on my testing of big data sets, I believe that an XY-Chain can fix every BUG incidence. As a result, it appears exactly before that approach in the solver; it’s a simple solution if you recognize the pattern. Other, less complex techniques may do the same function, but not as well as XY-Chains. 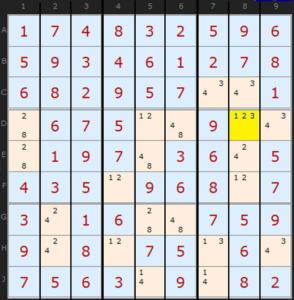 Example of a BUG: Load Here’s an example put together by Peter.

Candidate 1 would only appear once in row D, Column 8, and Box 6; removing him from the cell does not result in a destructive pattern. Next, candidate two is eliminated, resulting in:

4. Every other unit has unresolved cells in which every candidate appears twice. 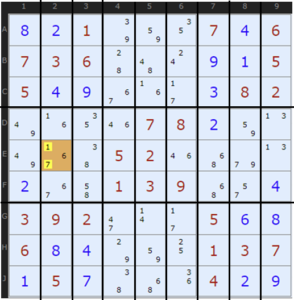 27 bug minimum: from the beginning

This is a sophisticated approach. Its name is derived from the phrase “Bivalve Universal Grave.” Except for one square, we’re seeking a condition in which every remaining square has two digits (value) (poly value). 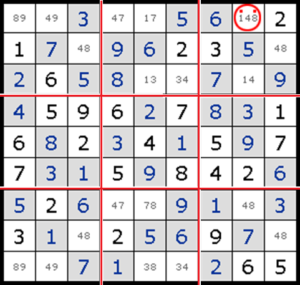 If R1C8 were 18>, we’d have a Sudoku with two values in each of the remaining squares. Furthermore, each unanswered option would appear twice in every row, Column, and block. This design is known as a Bivalve Universal Grave (BUG) pattern; therefore, it is not permitted. The Sudoku would either have no solution or several solutions, making it non-unique. As a result, R1C8 cannot be either 1 or 8. As a result, 1&8> may be eliminated from R1C8, leaving just four>.

The “Bivalve Universal Grave” (BUG) principle asserts that if each unresolved value in every row, Column, and block only has two potential placements remaining, the problem will not have one solution. This means is that you can’t have every cell with only two pencil marks in it. If this had happened, the riddle would have been invalid from the start.

Type 2 is substantially more difficult to detect. Remember, we’re attempting to avoid the impossibility of leaving two pencil marks in each cell. Finally, notice that removing the seven from them would result in no new singles, pairs, or other combinations. We would be stuck with all cells having only two pencil marks, which cannot happen as previously established.

As a result, we may conclude that one of the blue cells, in this case, is a 7. And, while we don’t know which one it is, we know that any cell that overlaps all three cannot be 7. Therefore, the pink cell’s seven pencil mark can be deleted. 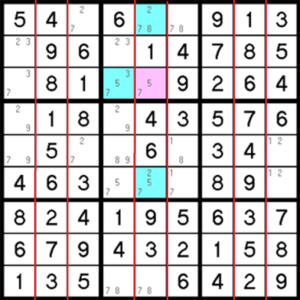 Each unresolved cell in a BUG has two candidates, and each candidate value appears precisely twice in each row, Column, and box restriction. If we can discover a valid solution with half of the remaining candidates, each constraint will be satisfied precisely by all the eliminated alternatives. The second side of the puzzle will likewise provide us with a solution. There’s also the potential that the puzzle is completely unsolvable. The riddle is likewise invalid in such a situation. We can deduce that the puzzle is invalid due to the presence of the BUG pattern. There are two options: no solution or two solutions.

Finding a BUG indicates that you may stop trying to establish that the Sudoku has a unique solution. The BUG pattern has no other use for you.

You can utilize tactics to prevent the pattern from forming if you trust the puzzle’s creator. However, because the BUG pattern cannot exist in a well-formed puzzle, such a configuration may also be solved using coloring techniques without relying on the uniqueness of the solution.

The logic is that if we have a grid made up of a BUG grid plus additional candidates, we must place at least one of the extra candidates. Thus, a BUG grid with k more candidates is referred to as BUG+k. The simplest variant is BUG+1, in which the one extra candidate may be placed in its cell right away. 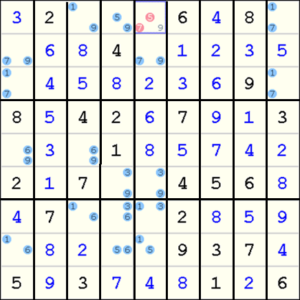 The digit 9 in r1c5 is the additional candidate in this example of a BUG+1. The BUG pattern is obtained if r1c5 is not 9. As a result, nine may be put in that cell, and the Sudoku can be readily completed with singles.

As previously stated, coloration may be used to make the same inference. The chain, in particular. 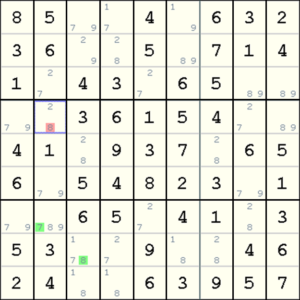 In this case, though, a much easier deduction may be made. We may quickly assume that r7c2>8 and r8c3>7 since r7c2 and r8c3 observe each other (by simple proof by cases).

Do you want to know Sudoku Solving Algorithms? If yes then follow the given link